Kristen Stewart Ignoring Rupert Sanders’ Texts, He Wants Her Back! 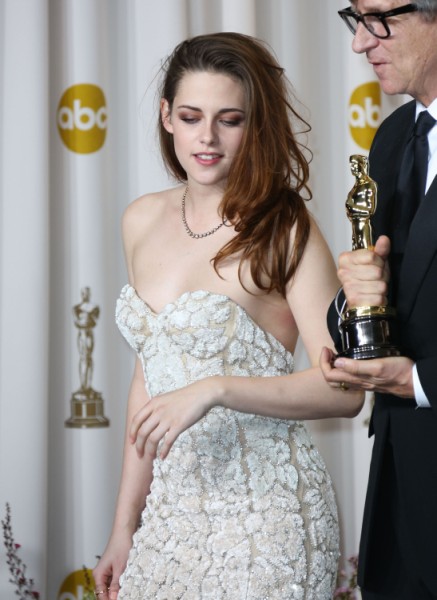 Did he ever really have her? I mean we all know he had her but, according to many Twihards out there, he never had her heart, right? That’s why Robert Pattinson could take her back. She never emotionally cheated! Tomato/tomatoe – let’s move on.

Apparently Rupert Sanders has been blowing up Kristen Stewart’s phone ever since Liberty Ross filed for divorce but she’s been avoiding all interaction. Good girl. Radar Online doesn’t get into the details over the tweets. I’m not sure if they are friendly “Hey, you want to meet and make out for old time’s sake?” tweets or if he’s lobbying hard for a relationship. It’s Rupert so who knows? Dude isn’t exactly known for making good decisions. I still think Snow White and the Huntsman sucked.

“Kristen doesn’t really know what’s going on with her and Robert at the moment, and she’s been left in limbo,” a source told Radar. “Ideally, she would like things to go back to how they once were, but that’s proving a lot more difficult than she imagined. But when it comes to Rupert, that ship has sailed.”

Can you imagine if you saw pics of the two grabbing coffee in LA? My head would explode from the craziness but I doubt Kristen’s that dumb. Her career is just not getting back on track. People will eventually accept without Rob but they’ll never accept her with Rupert. Case closed.  Besides, sorry to always be shallow, but he’s gross looking.

This hasn’t been the best week for Kristen. She’s coming off an embarrassing Oscar show and now we’ve got these Rupert Sanders’ texts. Girl needs a break. Maybe she should take some time and go down to Australia. She could spend time with her man and silence some critics at the same time. I’m not getting a weird feelings, per say, but anyone else wonder why she hasn’t visited yet? Is Kristen Stewart ignoring more than one guy right now?