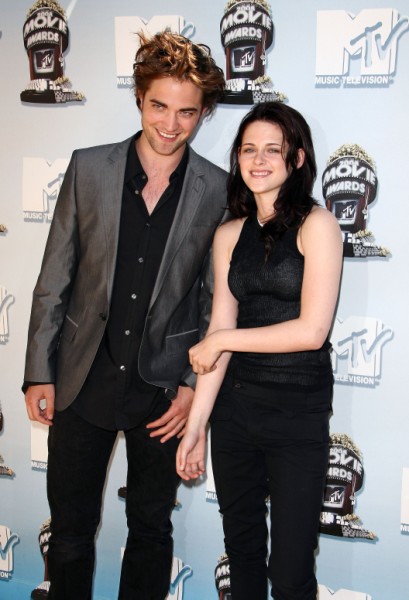 Did you know about the Breaking Dawn – Part 2 DVD release on March 2? Oh but you do now! Because, apparently, the long-awaited Kristen Stewart/Robert Pattinson break up announcement is supposed to happen after the DVD finally hits stores. Summit Entertainment really milked this one, didn’t it? Clever marketing to the very end.

What! No way! A studio would never use its stars’ personal lives to sell some measly DVDs! Um… yes it would and yes it is.

But if you’re not sold, let’s play naive for a little while then. A source apparently told HollywoodLife (so you already know it’s bullshit) that the studio knows Rob and Kristen are over but have asked them to wait until the  Breaking Dawn – Part 2 March 2 release to make their big announcement. It obviously doesn’t want Kristen and Rob’s personal tragedy to interfere with all the money that’s about to come in. I’d think just the opposite really. Did Kristen’s days as a trampire ruin sales for the movie when it hit theaters? If anything, all the ensuing drama probably helped!

I’ve gotta say I’m a little tired of the are they aren’t they. This has to be the longest game in movie history (I don’t know that. I”m just feeling extra dramatic this morning). It’s been going on for 4 years! And it still sells! Ugh, I’m ready for this DVD to drop and everyone to forget about Rob and Kristen’s enduring love for awhile. I’m sure they are too. The sources I trust insist that the couple is still going strong even with Rob working in Australia. I’m not saying they’re going to last. I’m just saying the gossip world has been slow lately and Kristen/Rob stories tend to help pass the days. Edward and Bella 4-Eva… for now