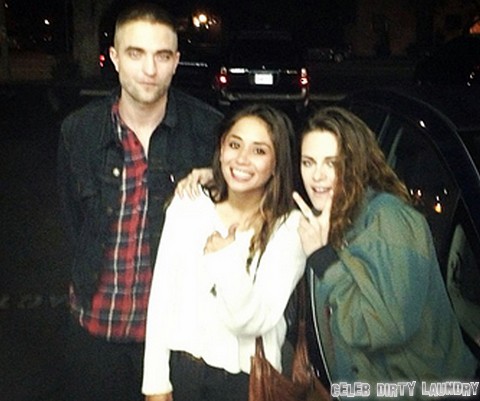 The couple that works together stays together. Well that’s what Kristen Stewart is hoping. But will it work? With more than one photo reunion floating around in the post twihard universe, Robert Pattinson and Kristen appear very much back together. They have been looking much happier lately. Then again they were looking just fine before Australia.

You know the trip. He was shooting a movie when word was coming out that Rob was giving a good impression of being single. Which could have been ignored if he didn’t also happen to take a prolonged vacation after the movie had wrapped.  So you could see why  Kristen started to take desperate measures. First she surrounded herself with his friends. Second she waited out the outback separation. Third, she pounced on him the moment he returned to the states.  I think the first free time he had to himself was when she went to the Kids’ Choice Awards. Then finally after months of speculation she got Rob to move back in.  Possibly through emotional blackmail.

What other thing could she do to glue him to her side than try to co-star with her leading man again?

Hollywood Life spoke to an insider who revealed Kristen’s hidden agenda. “This way they can spend plenty of time together,” says the friend. “She doesn’t want to be separated for long periods of time from him like when he went to Australia. This way they can work together and play together.”

Should we even be surprised? Kristen pulled the same thing after her Trampire ways were exposed. She had used the press tour for their last movie to slowly work her way back in with Rob. Many believe, including myself, that if wasn’t for the last installment of  mega blockbuster Twilight, Robb wouldn’t even have spoken to Kristen again.

Still it seems by her desperate actions that Rob may have forgiven but not forgotten. On the other hand, won’t their chemistry on set just remind him what Kristen did on another set with a certain director? Maybe Rob will insist on directing all of Kristen’s future movies?