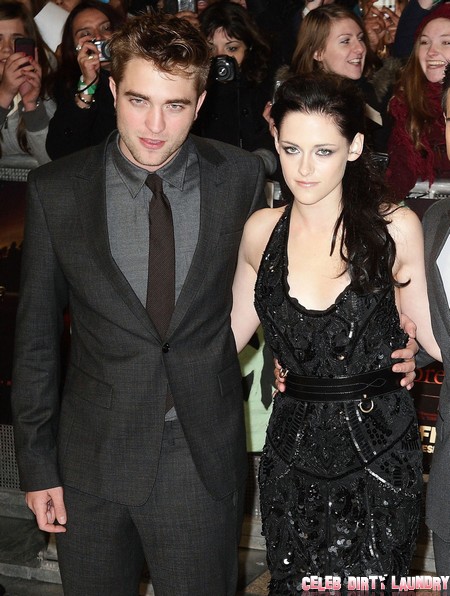 The reconciliation between Twilight lovebirds Robert Pattinson and Kristen Stewart may have been an act all along. It seems as if the people behind the movie franchise, Summit Entertainment, are forcing them to promote the movie together…whether or not they stay together.

“Rob and Kristen are legally required to promote Breaking Dawn Part 2 together along with the rest of the cast,” a source close to the situation tells RadarOnline. “Their individual contracts have very specific language about what is legally required of Rob and Kristen to do on the publicity tour. The studio execs at Summit weren’t happy when Rob and Kristen broke up, but this is why there are clauses about what is required of the stars to do. The promotional tours of the past Twilight movies are very much anticipated by the fans and almost becomes bigger than the movie.”

While the world waits patiently for the November 16th release date of the final film, the world will also wait to see if these two will be holding hands, posing together on the red carpet on November 15th.  Are they really in love? Did Pattinson really accept the apology of his two-timing girlfriend/costar? Sure, I do tend to believe at one point or another that Pattinson loved her, but not Stewart. You can’t come across as a heartless brat and expect people to be on your side. However, it doesn’t matter because legally their hands are tied with promotional duties.

It doesn’t help matters when your mother is breathing down your neck about making your relationship work, when Stewart’s mom filed for divorce this past summer and Stewart herself was getting “Cooped” in her Mini Cooper with her married director. Whatever Jules Stewart is telling Kristen though it must be working, for the moment. “As far as Jules was concerned, Kristen’s relationship with Robert was a match made in heaven and she adored him like he was her own son. At first, she struggled to understand why Kristen wanted to cheat on him. But Kristen’s young and Jules knows mistakes will happen, so she supported her daughter’s efforts to win Robert back.”

Puh-lease! It seems as if everybody around those parts is drinking the juice that Summit is giving them. Yes, they will promote the movie together. Yes, they will pose for pictures together. But do I really think that after that we’ll ever see them together again? No. Plain and simple.