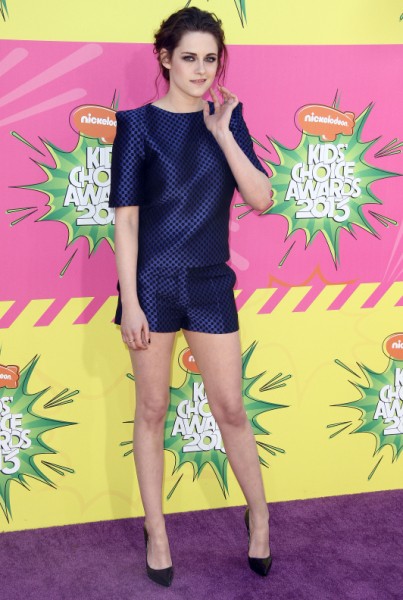 My God why couldn’t she have been this adorable and personable at the Oscars? More people were watching then! Is it too vulgar this early in the morning to say maybe she just got laid? Whatever the motives, someone pulled the stick out of Kristen Stewart’s ass because she was one of the big winners at the Kids’ Choice Awards last night.

It would seem she’s finally been forgiven. Kristen Stewart won for Favorite Movie Actress and even got slimed by two of the least controversial and lovable stars in Hollywood, Sandra Bullock and Neil Patrick Harris. I think her people must have been at work here somewhere. She had a catastrophically bad showing at the Oscars. Just about everyone left thinking she appeared a sullen loser all night. And here she is just a few months later beautiful as all hell hobnobbing with America’s Sweetheart. Oh, and she posed on the red carpet with angel-faced, virginal (maybe not anymore though) Selena Gomez. Someone was hustlin’.

Or can we forget about the PR slant and just assume Kristen’s happier because Robert Pattinson is back in town and back in her house? You can’t dismiss that fact. He was gone for six weeks and ever since he’s returned Kristen’s transformed from Cranky McCrankerson to Little Miss Sunshine. Are things finally looking up for Kristen Stewart? Kids’ Choice Awards shows mean nothing really. They’re like the MTV Movie Awards. They have nothing to do with talent and everything to do with popularity. Kristen wasn’t so popular seven months ago. Looks like she might be having a change of fortune though. She’s got three movies lined up – including the Rupert Sanders-less Snow White and the Huntsman 2. Could she be smiling from ear to ear because she finally has her career and her man back? Is a slimed Kristen Stewart an in demand Kristen Stewart?