Kristen Stewart And Robert Pattinson Australian Wedding – Marriage Is On! 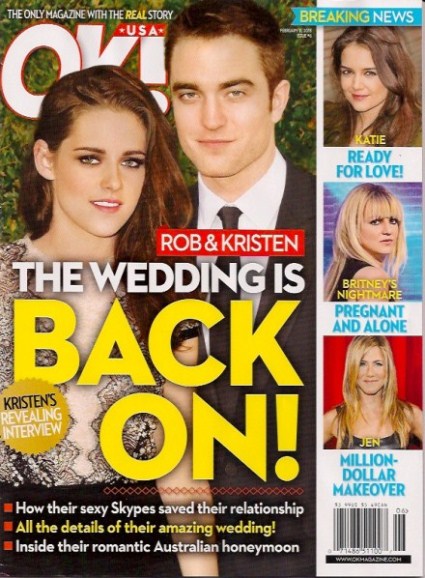 Could it be that Kristen Stewart and Robert Pattinson are having an Australian wedding and managed to patch things up once again?  He was rumored to have dumped her before heading off to a film location in Australia because Rob had realized 3 months away was going to be rough. How do you trust a home wrecker like Kristen to be faithful when you’re out of the country for three months? Look what she had done right under his nose! Then came word that Kristen had successfully helped to put a few final nails in the coffin of Liberty Ross and Rupert Sanders marriage. That didn’t help Rob’s tolerance for Kristen either. At least that’s what we all were thinking.

Now according to the new issue of OK! Magazine we couldn’t have been more wrong! Supposedly these two are not only back on but planning a fabulous wedding, again. They used Skype of all things to crack up the heat while they’ve been apart and they are planning to get hitched soon.

Also in the new issue is a piece on Britney Spears. Apparently the newly single mom of two might actually be pregnant. Can you imagine? Isn’t it rough enough that she lost a job and her man all in the same week? Can you imagine Britney having another child? That’s just not something I ever saw happening but OK has all the inside info!

More than 6-months after walking away from her marriage to Tom Cruise and his lavish lifestyle, Katie Holmes is ready to find love again. She has already put together a stable life for herself and Suri in NYC and now she’s looking for someone to curl up with at night. Who do you think would be a great match for Katie?  Tell us in the comments below and don’t forget to grab the latest issue of OK for more on these stories!