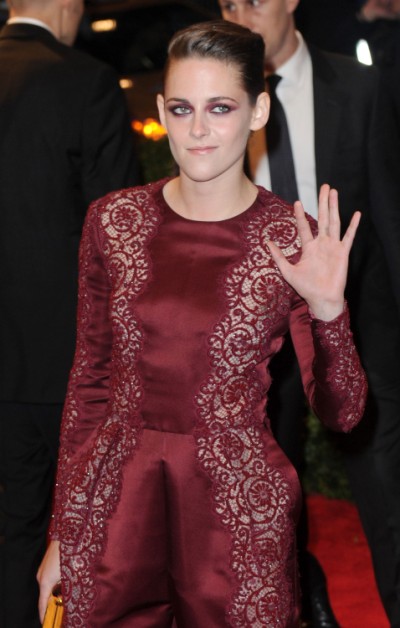 Kristen Stewart is still getting no love this year in the polls. First she shared the “Most Hated” rights with Gwyneth Paltrow and now she’s “Least Trusted”? Tom Cruise I get. All you have to do is stare at the shit-eating grin for a few seconds to know he’s trying to work you. But Kristen Stewart? Least trusted to me means she’s always gunning to spin you/trick you into believing something she isn’t. All she did was cheat on Robert Pattinson with a gross old dude. And she admitted it and swam in shit for a summer/fall to get over it. What’s more embarrassing and in-your-face truthful that that?

But the people have voted! According to a new Reader’s Digest Poll, Kristen and Tom have both come out on top as the stars you don’t take at face value. Naturally, Tom Hanks and Sandra Bullock  took the crowns for most trustful. It seems getting horribly embarrassed and cheated on works in your favor in the trust category which is probably while Kristen pulled such low numbers. According to Reader’s Digest trust is earned “with a person’s integrity and character, exceptional talent and drive, internal moral compass, message, honesty, and leadership.”

Well, damn. I suppose the moral compass thing screwed Kristen. And the honesty bit probably kicked Tom in the balls. Nothing says secrets quite like a high ranking member of Scientology.

But what’s interesting is that being untrustworthy hasn’t really hurt these two at the box office that much. Tom’s Oblivion has done much better than expected and, thanks to Rob Pattinson’s forgiveness, Kristen still has an in-demand career. So being hated and circumspect aren’t necessarily the worst things. Tom and Sandy’s movies (especially the one they made together) could have used some of that box office hate/love.

Perhaps this discussion needs to go deeper then. The death of the movie star is something that has been talked about a lot in recent years. Major stars can’t front movies with just their names anymore. The audience needs back story. We need smut and tabloid nonsense to sell a project. Does that work in Tom and Kristen’s favor? Is being hated for your sins such a bad thing?