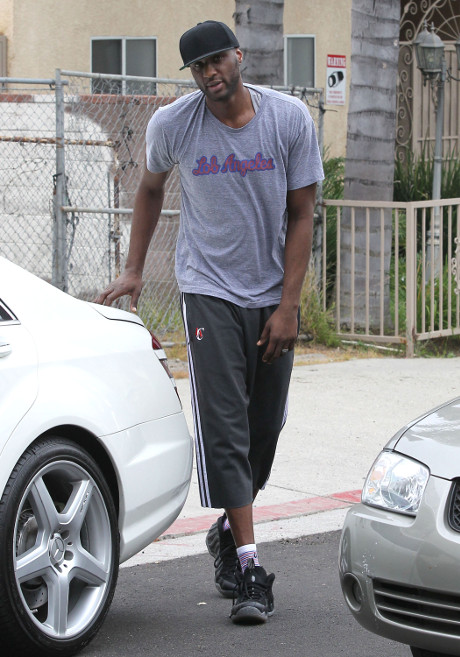 In light of all that’s been going on with Lamar Odom, the LA Clippers have decided not to resign the NBA star. Sources say that the team was all ready to re-sign him and that they even were in negotiation stages, with a deal on the table. But over the last couple of weeks, Lamar was being flaky and not showing up to meetings. While they were reportedly willing to let that behavior slide and continue with negotiations, when the news broke that Lamar Odom was struggling with drugs, all deals were quickly swiped off the table, according to TMZ.

Now, LA Laker forward Antawn Jamison has reportedly been signed to the team, which means poor Lamar is floating around in NBA limbo land.

While I wasn’t sure at first, it actually does seem like Lamar Odom’s dealings with substance abuse are true. I’ll admit that the entire story did seem a bit out there, especially given that we hadn’t heard anything about his drug problems while he was on good terms with Khloe Kardashian. Well, we received a tip last night saying that Hunter Frederick, one of Hollywood’s top crisis managers working in PR, has ventured onto the playing field. Supposedly, this dude enters the game when things get serious, damage needs to be controlled, and the stars need to seek rehab.

Our source says, “I just heard that Hunter Frederick who is a crisis manager in PR just left the office today. Hunter has done consulting for us with some of our clients who have drug and alcohol abuse handling media and securely getting them into rehab. Just thought you would like to know.”

When we asked if it seems like Lamar will be heading to rehab soon, the source said it seems as if that’s the logical next step. Hunter is hired to manage crises, and Lamar seems to have found himself in one. “When publicists call him in we know that there is a real problem and it’s not just gossip.”

That’s what we heard, so we thought we’d tell you. Let us know if there are parts of the story you’re still wondering about and would like to find out. We’ll do our best to locate the answers!