Lamar Odom Not ‘Crying’ Over Khloe Kardashian Divorce, Glad To Be Rid of Her and Moving On With NBA Career 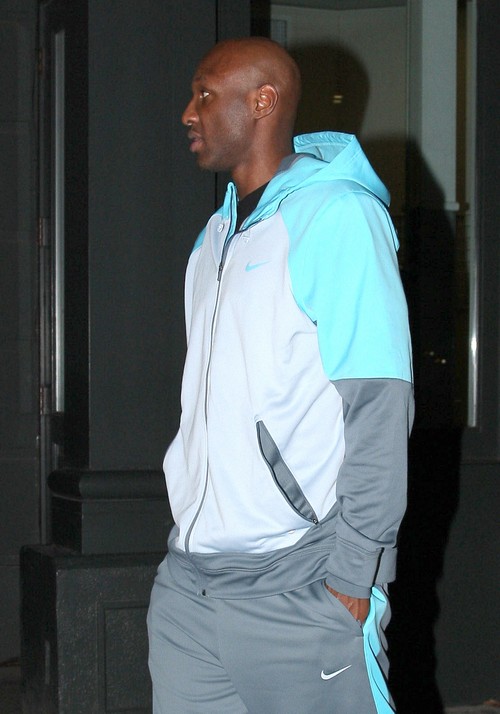 Khloe Kardashian finally made her divorce to Lamar Odom official, and according to a new report from Hollywood Life, Lamar’s already moved on. They claim that Lamar is not sitting at home ‘crying‘ about the situation, and has already started going out with his friends and partying. Um, of course Lamar’s not ‘crying’. Why would he cry about something he saw coming from a mile away? He’d have to be a complete idiot if he thought Khloe would take him back after everything he did.

In fact, I wonder what took her this long to make her move. Perhaps she was hoping that he would change? Well, according to this report, he definitely hasn’t and probably won’t change anytime soon. I mean, partying the night after his divorce becomes official? That says pretty much anything we need to know about their relationship, doesn’t it?

Anyway, Hollywood Life’s ‘source’ tells them, “I’d be lying if I said he wasn’t sad. He and Khloe have been through a lot of sh*t but you know what, nothing is forever. Don’t expect him to be crying or anything because that’s not what he’s doing. He’s just realizing that he’s got a little road ahead, things like signing these papers, getting the rest of his sh*t out her their place and things like that.”

This reads less like a ‘source’ talking and more like fan fiction written from someone who has way too much investment in this relationship. Also, why would anyone actually be EXPECTING Lamar to be crying? I can wager Lamar’s not the crying type. If he was, he probably wouldn’t have cheated on Khloe with his harem of strippers and then pretended as though nothing happened.

Anyway, I guess we’ll soon be hearing about Lamar’s wild nights out on the town and Khloe’s ‘reactions’ via Hollywood Life’s source.

Lamar also casts blame on Khloe … telling his friends, “I can’t be f**kin’ with Khloe. She brings out the bad side of me.”

Lamar says he needs to “get married” to his basketball career and wants to ignore the past.

One thing is certain – being around that Kardashian-Jenner famewhore reality TV gang never helped an athlete – look at Bruce Jenner, Kris Humphries, and now Lamar Odom. What do you guys think? Let us know your thoughts in the comments.