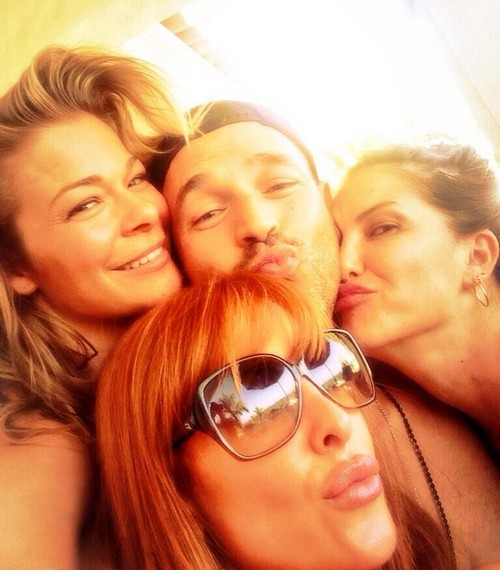 Did anyone think that LeAnn Rimes had any friends? I mean we haven’t seen any proof of it in years, every time she’s spotted out she’s clinging to her husband Eddie Cibrian as if he’d stray if she dared to leave him alone. Oh wait… Anyway, somehow LeAnn and Eddie convinced VH1’s producers that if they did a reality-esque show then the viewers would tune in to watch the lovebirds. Of course this show is scripted, I mean I don’t think either of them wants us to see what really goes on when LeAnn loses her sh*t over fears that Eddie will cheat, causing her sanity to take a serious nosedive. They also don’t want us to watch LeAnn drink until she’s lying in a heap in her closet. In other words, they have to script this thing.

According to Radar Online, VH1 also had to hire someone to play the role of Leann’s best friend! How pathetic is that? I mean, does she have a couple BFF’s that just don’t want to show their faces or is she really all alone in that mansion? Either way there is a totally great twist to this story. Apparently the hired friend is also a real friend of Brandi Glanville’s! In case you’re out of the loop, Brandi was married to Eddie when LeAnn swooped in and successfully broke up Edie and Brandi’s marriage as well as her own. Needless to say there is no love lost between these ladies and at times it’s downright war. Brandi is thrilled to have a “spy” on the inside and who can blame her? She hates LeAnn for ruining her marriage and then daring to become territorial over Brandi and Eddie’s sons.

This friend can act like the proverbial fly on the wall for Brandi and LeAnn was too stupid to even realize that she had a double agent on her payroll! Will you tune in to watch this hot mess of a show? Can you believe LeAnn had to hire a friend? Tell us your thoughts in the comments below!