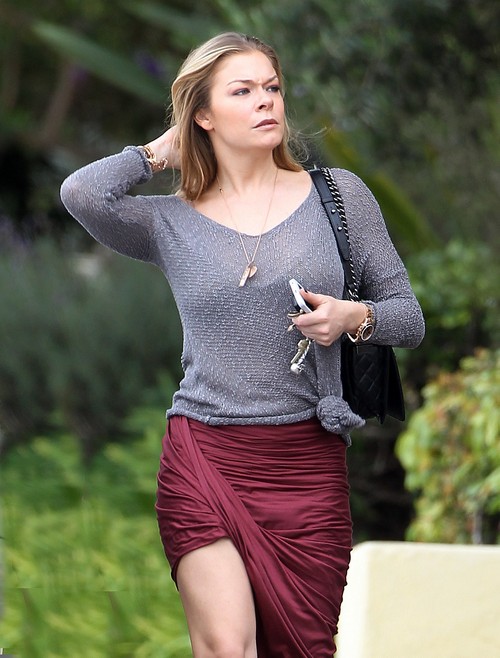 Brandi Glanville has come a long way in the last few years. She endured a very public and painful divorce that was made more difficult by her ex-husband Eddie Cibrian’s new spouse LeAnn Rimes. LeAnn oddly enough has made a point of keeping the topic alive in the media by constantly talking, tweeting, and singing about it even though it highlights her own immoral behavior and has caused her to lose public favor. Sadly no matter how far ahead Brandi gets she can never escape the hate that is directed at her daily by LeAnn’s supporters. As LeAnn’s mental and marital demise becomes more public, the hate towards Brandi intensifies to the point where it isn’t justifiable and has become hate for the sake of hating.

Brandi recently opened up in the Sober Book about her struggles. She does not speak of LeAnn, she simply writes as one human to another about the scars she carries from her ex-husband’s infidelity, their eventual divorce, and the ongoing pain that comes with having to share your children 50% of the time. She bares her soul and talks ill of no one, and yet she got bashed for it.

I do not like the term hater, because I feel having an opinion doesn’t make you a hater, however hating on someone just for the sake of hating does make you hater. Is divorce difficult? Yes. Is it more difficult when kids are involved? Hell yes? Does it leave emotional scars? Most definitely. Is Brandi the only one to ever endure this? No. But does she have a platform on which she can speak and help others going through the same thing? Yes. So why the hate? I do not get it. To judge someone on their actions is one thing, but to judge someone on their feelings quite another. Bottom line: personal feelings aside we should never berate and judge someone for sharing their struggles, because in doing so we berate and judge everyone else experiencing the same thing ** takes a bow and steps down from her soap box**.

Brandi also opened up recently to FOX411 and shared her hope for peace and some semblance of normalcy in her co-parenting future, free from all the drama:

I really want that. I don’t want all this crap to go on forever, for my kids’ sake, too. For the first time in a while I sat down the other day at parent-teacher conferences and we all got along. It was easy and it made me feel there was hope. I don’t see us sitting down for Thanksgiving dinner, but I want to get along with them and to negotiate easily.

Mind you there was a time that LeAnn would not allow Brandi to have their address or phone numbers – not because of a court order – but out of her fear that if Brandi and Eddie talk they may end up back in bed together; fears that are not unfounded since having been his mistress LeAnn knew what he is capable of (and vice versa – although I hardly think Eddie is worrying what LeAnn is doing or who with). Hey LeAnn I got a quote for the day for you: “Rule number one: never be number two.” Ohhhhh it’s too late – better luck next time.

Brandi – a former model and now reality star and New York Times bestselling author – who often gets called a fame whore even though she was content to live a quiet life in the shadow of her husband before being thrust into the spotlight because of her then husband Eddie cheating with LeAnn had this to say:

For a long time I did lose my ambition and was just happy being the woman behind the man, changing diapers and making dinner. I didn’t have goals for myself other than being a great mother and wife… I am still figuring out who I am and what I want, but I am really having a good time doing it.

As Eddie has started to realize the sheer depth of LeAnn’s alleged psychosis, which includes continued stalking and taunting of Brandi, it has pushed him away from LeAnn and closer to Brandi – at least in a friendly matter. Both Eddie and Brandi are ready to just be adults and peacefully co-parent and Eddie showed us that he is taking back control of his life and actions – which were formally controlled by LeAnn who holds the purse strings – by letting Brandi see Mason and Jake on one of his parenting days:

When children are involved, divorce is not a means to an end but an ongoing process. There is no clean break – no see ya when I see ya – it is a transition into a new normal and it seems that Brandi and Eddie are getting there now that LeAnn has lost control of the situation. This is all very telling because it further proves that Eddie and LeAnn are headed for a divorce: a) LeAnn would never allow Eddie to let Brandi see the boys on his days if she is calling the shots, and b) Brandi who has endured a lot at the hands of LeAnn is being very kind and civil – likely because she more than anyone knows the truth about what is happening behind closed doors and being a girls’ girl (even to the girl who did her wrong) does not want to add insult to injury at this time.

Now LeAnn being LeAnn must have been feeling threatened by Eddie and Brandi playing nice so she took to twitter to remind us tonight that she is mom too y’all. Well kinda sorta not really but she likes to say it anyway “‘cause happy happy happy bonus happy mom happy me happy life .. wait where is Eddie??? Edddieeee …”

Oh by the way LeAnn, stop with the pathetic subtle attempts to start rumors that you are pregnant, “new beginnings that are soon to come ….” Puhleeez, you were just jumping out of a plane which is a big no no when pregnant so we know that you are not currently with a bun in your oven, but perhaps rather a beer belly. Gawd you are exhausting. I think it is time you revisit the lyrics to the song Crazy by the amazing Patsy Cline that you have previously covered, and have yourself an epiphany or something. As they say… life often imitates art and the lyrics to that song perfectly matches LeAnn’s “love story” with Eddie. Like. Perfectly.