LeAnn Rimes has been having one bad week after another, but before you go feeling bad for her remember that she is the creator of her own drama and her own demise. Her last no-no was when she laughed at a tweet that used the term gay in a derogatory sense to describe her ex-husband Dean Sheremet, whose only mistake was ever marrying LeAnn – truth. She of course didn’t apologize, just like she didn’t apologize for joking about being a home-wrecker and child stealer – because apologizing would mean owning her mistakes and admitting that she was wrong and LeAnn would rather watch her career and image crash and burn then to ever admit she was wrong.

That said, LeAnn is not completely unaware of the mess she has made and it is evident in her Twitter feed. She has spent the last few years tweeting compulsively, and in fact her tweeting has been a contributing factor in the dramatic plunge in her popularity and likability because of her reckless tweets that helped to expose her true colors. At one time she alluded to Twitter being the reason behind her stint in rehab – which is beyond ridiculous because if Twitter was giving her so much anxiety why not just close her account?? I mean isn’t that just common sense, and also it makes sense financially because it is a cheaper solution than rehab. But I digress, the point is Twitter is important to this chick and she normally tweets like it is going out of style. She has however been eerily quiet the last few days, which basically just means she is tweeting like a normal individual rather than a manic one.

It has been reported that after snagging Eddie Cibrian LeAnn fired her PR team so that she could have freedom to do as she pleases when she pleases and tell the world her truth. I am a big advocate for telling the truth and telling one’s story but when your truth is that of a manipulative, morally bankrupt, and vindictive individual you may not want to shove your truth in everyone’s face on the daily unless you don’t mind losing public favor, fans, and eventually your career – but LeAnn seems intent to learn this the hard way.

Recently LeAnn was let go of by her former label Curb Records – who she sued back in 2001 wanting out of their contract. She caused more problems for them that year when she publicly disowned her album I Need You saying that the record, “was made without her creative input and that she was “truly and deeply sorry” that it is being released.” Coincidentally – much like her public image – that album did better without her direction reaching number 1, which is more than we can say for her latest album Spitfire which should have been titled Misfire because it tanked proving that LeAnn is no longer a commercial success. Curb was willing to put up with her antics when she was actually making them money, but she no longer generates the album or ticket sales she once did so they were likely more than happy to see her go.

This has left LeAnn “unemployed” and desperate to sign with a label – any label – making it extremely important she doing a little PR clean up to try and make herself look marketable. What this means is LeAnn has got to be on her best behavior and keep her Twitter usage to a minimum, because with each tweet LeAnn slaughters her public image slasher movie style. It is a simple example of cause and effect: LeAnn tweets, LeAnn’s likability plunges.

This is particularly delicate time for Ms. Rimes because not only is she without a label but her marriage to Eddie IS ending. He is done and has emotionally checked out (and if the rumors are true physically checked out as well and won’t touch that with a ten foot pole unless he is under the influence), but he hasn’t filed divorced papers – yet- because ‘ole Eddie ain’t no dummy. He went into this marriage for money and he is going to leave this marriage with money so he is waiting to, “strike when the irons hot,” and that will be AFTER she signs a contract and makes some money.

Various blogs and Star Magazine report that it’s all over but the crying between Eddie and LeAnn. What we are seeing right now is the calm before the storm Twitter style. She has kept it really simple like Wednesday when she tweeted, “Just say down to watch Rudolph with the fam. I love the holidays!” You meant sat LeAnn – you just sat down- seems like someone is dipping into some of that “special” eggnog early this holiday season *wink wink*. She also tweeted that she was camping a few days ago and attached a picture of a bunch of empty seats which looked a lot like a LeAnn concert these days … *chuckles*… sorry I just couldn’t help myself but you understand LeAnn since you know all about limited self-restraint. 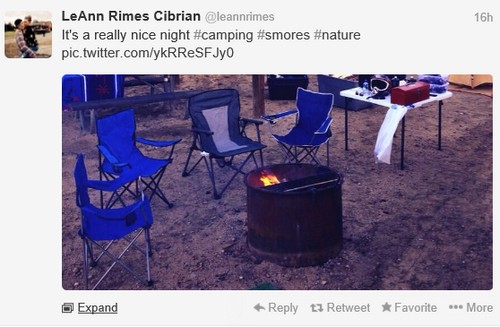 I suspect LeAnn’s moderate tweeting will be short lived because she craves attention and seeks it out like a moth to a flame. Right now she is trying her best to appease the people around her who are like, “for gawds sake LeAnn if you want a record deal STOP tweeting like a crazy psycho,” but I suspect she will be back to her usual shenanigans in no time. In the meantime she always has her pseudo accounts to curb her twitter cravings; a safe place she can go and just be LeAnn (yes I have decided “being LeAnn” or “doing a LeAnn” are now things), and get all her hate out without fear of repercussion. But there are always repercussions, especially when those fake accounts start getting exposed. And with so many eyes watching you will be exposed.