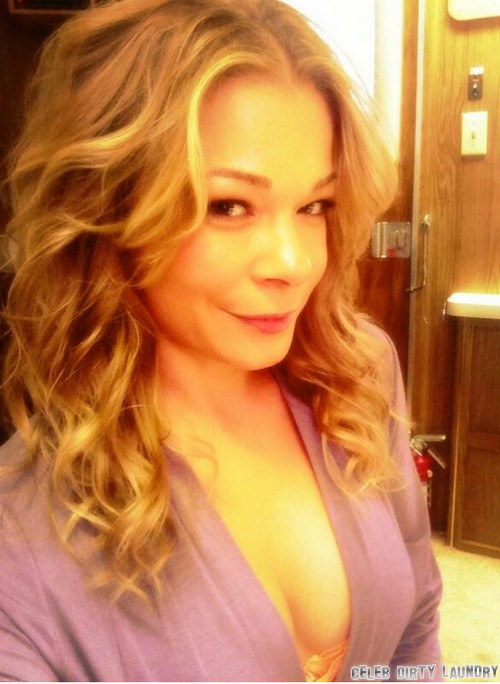 “People said I was [anorexic],” LeAnn Rimes tells The Daily Mail, pretending it wasn’t a compliment. “But I didn’t have a problem with eating as I ate a ton all the time—I could eat my husband under the table! But I was going through a time when I just wasn’t sleeping—my mind wouldn’t shut off and my heart was breaking.” No LeAnn, what was breaking was Eddie Cibrian’s marriage and family once you came along.

LeAnn ‘Loose’ Rimes decided to show off her BoobyLiscousNess to Twitter world in a racy photograph of herself while shooting her scenes for Charlie Sheen’s FX sitcom Anger Management. It was likely a BYOC (Bring Your Own Coke) party with the Tiger Blooded Sheen after set.

“Having a bit of fun today. Big hair, minimal wardrobe!” she said, alongside a snapshot showing off her wavy locks and cleavage. Sugar Momma Rimes went on to confirm that her role on the show is extra sexy (and almost always half-naked). The country pop star loves to display her hot body in bikinis, but is it enough to distract us from her face?

“Two scenes down, 3 to go. Got out of lingerie for one scene, now I’m back in it. At least I’m comfortable & no shoes is a plus,” the actress tweeted.

Let’s be honest. Some women look great in lingerie and swimwear, but horrible in jeans and a shirt. Just last night, with a face only a mother could love, she stepped onto the red carpet in a fit-and-flare tight LWD which flaunted her juicy curves while pairing the look with a Chanel clutch and black ankle booties, before her performance at the El Rey Theatre in Los Angeles for the Friend Movement Benefit Concert.

Certainly Brandi Glanville is most grateful the Man Snatcher is gaining weight . “Now I’m secure about my body,” she lies, “although I’m like any other woman and have my moments of self doubt. But it’s nice to have a husband who tells you you’re beautiful all the time. I’ll say to him: ‘I’ve gained a few pounds’ and he’ll say: ‘Good!‘”

Well of course, Eddie’s mother did not raise a fool.