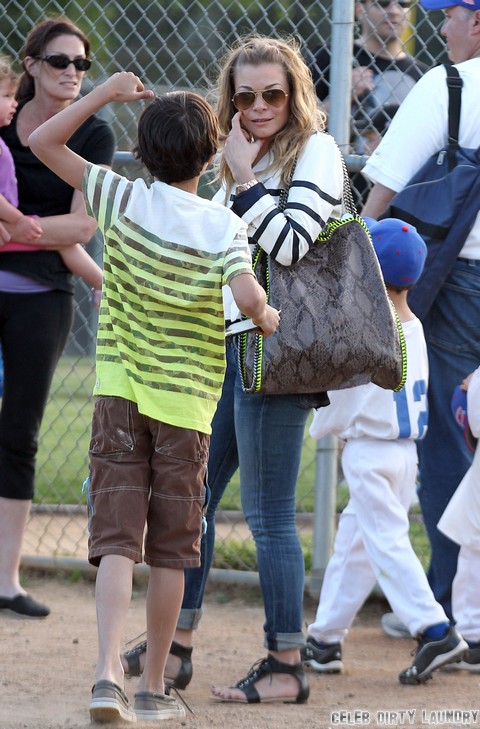 LeAnn Rimes and Brandi Glanville are involved yet again in another media dispute. This time, it’s over whether LeAnn is a good mother or not. Brandi initially criticized LeAnn Rimes for not being an attentive stepmother, largely due to publicized events such as the one where Brandi’s sons were out biking without helmets. Brandi hinted to LeAnn that she needs to start getting it together and taking better care of her children, instead of concentrating only on herself.

Of course, LeAnn didn’t take that well, and she decided to tweet about the important of her role as a stepmother. However, she seems to have gotten some Twitter hate, because she added [in a clear jibe against Brandi], “Supporting other step moms is not putting down bio moms. Some people seriously need to grow up.”

See, I wish this issue was being dealt with people other than LeAnn and Brandi. This is actually a very interesting look at people’s perceptions of the role of the stepmother versus the birth mother. If both are still in the picture, who gets blamed? Who gets the most rights? Who has the most claim to the boys? Everyone has differing views, but things get even more complicated when you throw in two famous [and I use that word loosely] celebrities who have had their own history of public confrontations.

In this case, Brandi does have a huge fan base from her stint on the Real Housewives, and she also has the jilted wife card that she’s been playing over and over again. Fortunately for her, it never fails to work and her fans have been tweeting at LeAnn for the past couple of days. Needless to say, this is an incident that won’t get solved that easily, but who do you think is the better mother? And is Brandi correct in her criticism of LeAnn?