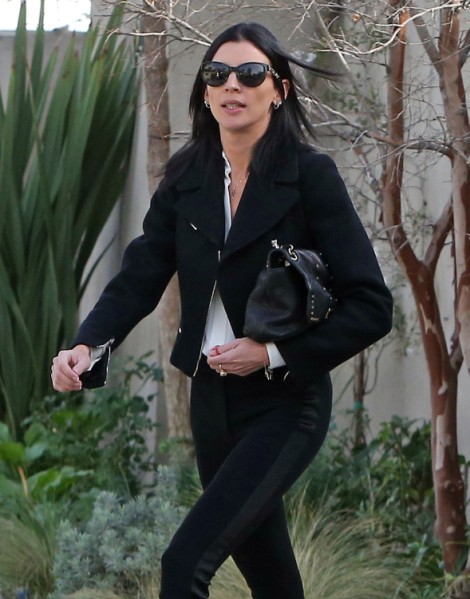 Well, Kristen Stewart did steal her husband. Yes, she gave him back but who would want him after that? It’s only fair for Liberty Ross to capitalize and steal some of Kristen’s career thunder. She’s a single mum now. Let’s show her some love.

Before you get all Twihard crazy on me, I know not everything Liberty does has a direct connection to Kristen Stewart but it’s so much more fun to imagine it does. And, really, would Liberty be looking hot all over LA if Kristen didn’t rub all up on Rupert Sanders in her Mini Cooper? Probably not. So this is really a case of correlation vs. causation but we don’t have to get into that right now. Let’s just focus on the fact that Liberty’s carrying scripts around Hollywood for all to see.

According to Splash News, Liberty was caught with a script for the new NBC pilot, The Sixth Gun, which was originally scheduled as a six-part series in 2011, but got the ax. It must be up for consideration again and Liberty could be a bankable choice. No one knew who she was a year ago and now she’s a part of the most talked about Hollywood quartet. Kristen and Rupert really did do wonders for her career. She’s been modeling more and even walked the runway at New York Fashion Week for Alexander Wang’s Spring/Summer collection. Liberty and Brandi Glanville definitely know how to make heartache and embarrassment work for them.

Up until recently I would have said that Kristen Stewart’s career hasn’t been as fortunate but she did just finally sign on to a new movie, The big Shoe. Kristen Stewart is joining Elizabeth Banks and Jim Sturgess in the Steven Shainberg film so I’m already applauding her choice since I love both of those actors. Hopefully her slump will go away now. I wasn’t quite sure if Kristen was just being picky or if Hollywood was staying away until the scandal finally faded. I have a feeling both women are going to be just fine in the future. An NBC show would be a huge deal for Ross and Kristen’s got to be stoked that the use of the word trampire is getting to be few and far between. Rupert Sanders, on the other hand, I’m not so sure….

So if Liberty Ross is planning revenge against anyone by making it in Hollywood it’s got to be Rupert – not Kristen. There’s plenty of room for those two women to co-exist. It would be a nice kick in the crotch for Liberty to be more successful than Rupert in the States since he dragged her over here for his career in the first place. I will say good look to her.

Are you excited for Liberty Ross’ acting career? Does she have what it takes to stay relevant post-scandal?