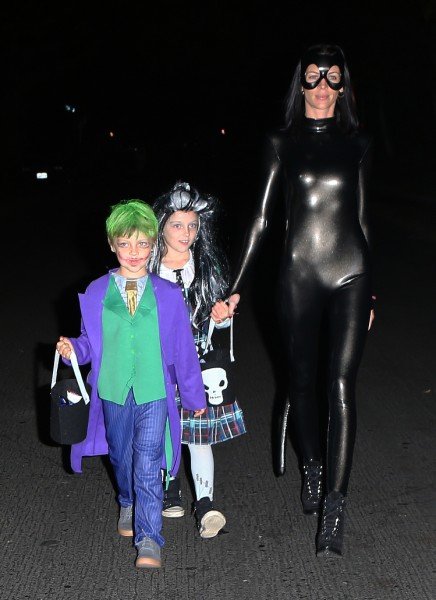 God damn Liberty Ross! Kristen Stewart gets it. We ALL get it! You’re hot! Now go back inside, take off your skin-tight Catwoman costume, put on some pajamas, and stop making me feel bad about myself!

The model was spotted last night enjoying Halloween with her two children and estranged husband, Rupert Sanders. Is it true that the family that trick-or-treats together is the family that stays together? Does this family look like a jovial unit in these pics? They appear awkward as all hell to me but Rupert seems to be back in the picture although he’s sulkily lagging behind as Liberty poses for the paparazzi.

Because Liberty wants us to (and she obviously wasn’t shy about getting her picture taken last night with her children), let’s over-analyze the hell out of these pics. First off, a mother of two only dresses up in a Catwoman suit like that if she has a hot body and wants the world to know it. Kudos to Liberty on that one. Again, Rupert Sanders is a dumb ass of epic proportions. Why cheat on that woman, let alone the mother of your children? But whatever, we’ve been through that story a million times by now. But besides showing off to the paparazzi and the other moms trick-or-treating with their kids (who were probably throwing Liberty major eye-cuts all night), I like to think Liberty was also throwing her own message out there to a certain ex-mistress. Don’t mess with my family or I’ll scratch your freaking eyes out! Or maybe I’m all woman, Kristen! You’re just a child! Or what about Take a look Rupert. This is what you almost f-cked up. Any of those will suffice because you don’t go out looking like that without an ulterior motive. For instance, you know who else dressed up as Catwoman (but didn’t look nearly as good)? Kim Kardashian. Exactly. We can all agree that when you do the same thing Kim Kardashian does it’s not because you’re trying to fly under the radar.

So what do you think? Is Liberty Ross’ Halloween with Rupert Sanders basically telling Kristen Stewart she’s got nothing on her or is Liberty just taking advantage of all the attention she’s getting and trying to bag more modeling/acting gigs?