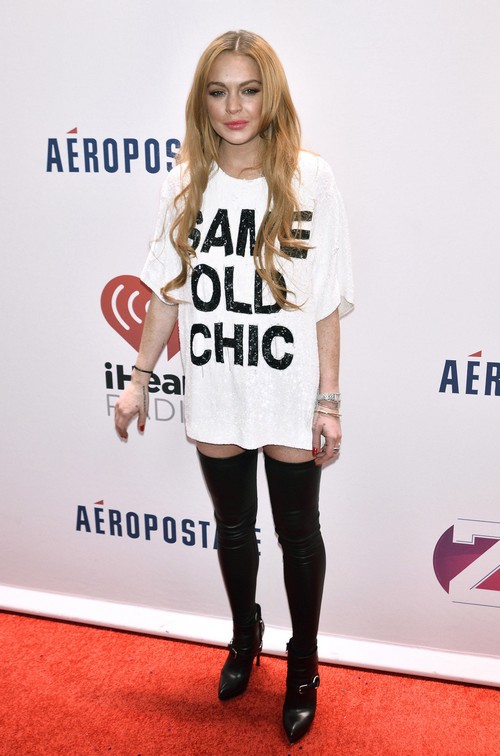 Lindsay Lohan‘s immaturity knows absolutely no bounds. Even rich and spoiled teenagers have had enough of her, according to a report from Page Six. Since no one else will hang out with her [probably for fear of their image being marred for life], Lindsay’s taken to hanging out with teenagers almost a decade younger than her. But guess what? Even rich and spoiled teenagers think Lindsay is too ‘childish‘ to spend time with.

Apparently, Lindsay’s been getting up to her old cracked out shenanigans again, including stalking rumored ex-boyfriend, 18-year-old Morgan O’Connor. A source explained, “She finds out where Morgan is, then shows up and causes problems.” Poor Morgan. Imagine having a crazy, cracked out stalker following you at 18? The source gave an example of one particular incident where the cracken went overboard, adding, “Morgan was staying at the Dream Downtown, and Lindsay showed up and found out which room he was in. She knocked on his door, came in and started bitching Morgan out. She was ordering all the girls to leave, telling one that her Balmain jeans were fake. She said she wouldn’t leave till they all left. These kids are 18.”

Apparently, hotel security soon arrived, thinking it was her room. But guess what Lindsay did? Instead of leaving the hotel like a normal person, she decided to lock herself in the bathroom. The source adds, “It’s childish stuff. She’s chronically distraught. Every time she comes around, she causes problems. Morgan’s modeling, he’s going to the gym, working for charities — he’s got stuff to do. He doesn’t want to be around Lindsay or her ­behavior.”

There’s a lesson to be learned for all the young celebrities and high-flying youths who live in Los Angeles: the cracken is coming for you, and she won’t stop until she gets you. So any boy under 21 who has money, go into hiding until she leaves the city. Morgan O’Connor should be the example you all use for refusing to party with the cracken. Once she gets her claws in you, it will be a long, long, long time before she lets go and leaves you in peace.