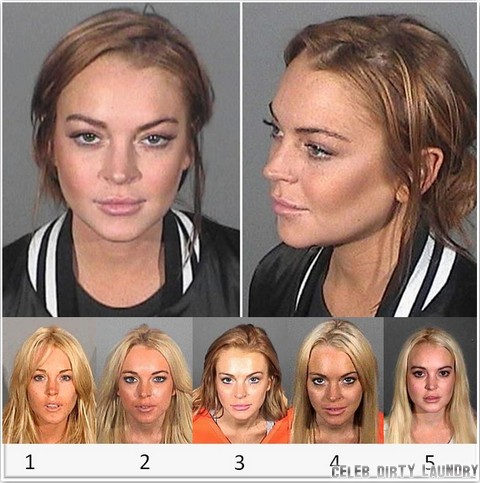 Lights, camera, mug shot! Lindsay Lohan is back on camera. Not a film camera, but a police “headshot.” She finally nailed this one! She looks good! Like they say, practice makes perfect! Maybe Lindsay should start submitting her mug shots for work. Since she’s not getting much these days. This latest portrait is Lindsay’s sixth booking photo. She had it done with the Santa Monica Police. At this rate, she should start an album soon. Or maybe a portfolio. Since she’s a repeat customer, she should get a discount.

She recently got off the hook. No jail time! She got booked and released instead. It’s great when the justice system works so well for dear Lindsay. She has single-handedly turn the justice system into a joke. She can probably get away with murder. The 26 year old so-called actress accepted a plea deal on Monday. She was apparently involved in a misdemeanor car-crash case that came with a hefty price tag. It includes 90 days in a locked-down rehab facility and we mean locked-down. She’s not allowed to leave! Not even Houdini can get her out. But we’ll see how she’ll escape. She always seems to anyway! That’s not the end of her punishment. She has to serve 30 days of community service and 18 months of PSYCHOtherapy. Oh and a bunch of fines.

We really hope Lindsay gets her life back together. We liked her in “Mean Girls.” What happened since Lindsay? She fell victim to the child actor curse perhaps. Finding fame early on in her career certainly destroyed her future thus far! She should enroll in college and find another passion. That’s the only way she won’t end up in a back alley somewhere in Tinseltown. She seems destined for that path. And that would be awful. Get it together Lindsay! Show us you really got some talent.