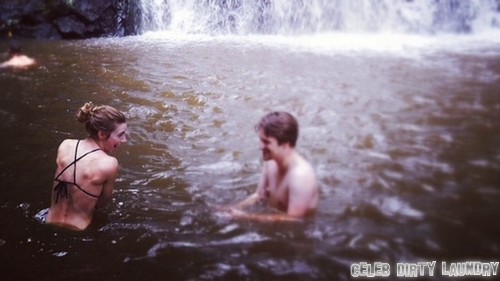 Edward Snowden’s miraculous, film-like saga has gripped the world. After leaking confidential US government secrets, Snowden managed to escape to Hong Kong three weeks ago. The man behind the biggest security breach in US history not only sacrificed his career, family, friends, and girlfriend for the alleged truth, but he also forced his personal life into the escalating scandal.

Yesterday, several media outlets unveiled Mills’ identity, as well as a personal blog documenting her four-year courtship with Snowden. Writing under a pseudonym, Mills calls Snowden “E”, while she refers to herself as a “vagabond”. Pictures of the couple compliment the naïve narrative, but in more recent posts, the images are replaced with the morose ramblings of a heartbroken 28-year-old. On Monday, after Snowden’s identity was revealed, the blog took a somber and disturbing turn when

Mills wrote: “My world has opened and closed all at once. Leaving me lost at sea without a compass. As I type this on my tear-streaked keyboard I’m reflecting on all the faces that have graced my path. The ones I laughed with. The ones I’ve held. The one I’ve grown to love the most. And the ones I never got to bid adieu. But sometimes life doesn’t afford proper goodbyes.”

According to several sources, Snowden thought of marrying Mills when he whisked her away to Hong Kong last year, but this dream quickly faded when he exposed the NSA’s PRISM program – a surveillance network which gives government officials access to data held by nine of the world’s biggest internet companies.

Was it really worth it in the end?