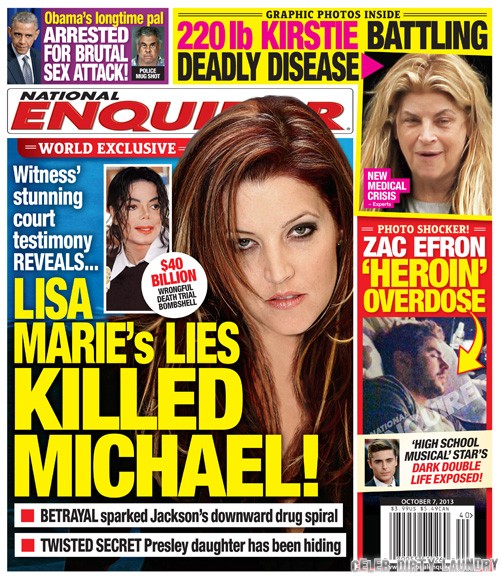 As Michael Jackson’s wrongful death trial drags on all sorts of new information and random accusations have taken center stage as the Jackson family tries in vain to make AEG accountable for Michael’s overdose on Propofol 4 years ago. Needless to say the defendant’s are putting up quite a fight and dragging witnesses in from half a lifetime ago to try and paint a different picture of Michael, one that doesn’t blame them for his demise.

According to the Oct. 7th print edition of National Enquirer Michael’s marriage to Lisa Marie Presley back in the mid-90’s helped to propel him into heavy duty substance abuse. Michael reportedly loved Lisa Marie a whole lot more than she seemed to love him and a series of lies and indiscretions on her part were too much for Michael to handle. He often complained about his inability to sleep while they were together and after they split that’s when Michael turned to harder substances for relief.

Speaking of drug use, the new National Enquirer also has exclusive information on former Disney star Zac Efron’s overdose earlier this year on HillBilly Heroin, Oxycodone. According to a friend that he partied with back on January the 3rd Zac mixed booze, adderall and a near fatal amount of Oxycodone and ended up dropping from the concoction. Fellow party goers ended up reviving Zac and feared that he was headed for tragedy. Did you have any clue that Zac was running with a tough young Hollywood crowd and partying a bit too hard? Tell us your thoughts in the comments below!