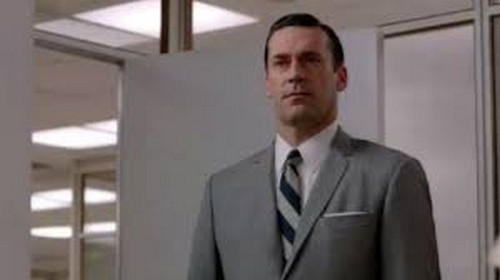 MAD MEN aired tonight with another great episode, I cannot wait until next week, but I am sad it is already the season 6 finale.  Next week’s episode is called, “In Care Of,” and we have managed to get our hands on some juicy spoilers and a sneak peek video of the episode.

On tonight’s episode Betty calls Don and tells him that Sally doesn’t want to go to his house for the weekend, in fact, she wants to go to a boarding school. Peggy and Ted are flirting at work and when the two head to a movie together, Don and Megan bump into them. Harry tells Don they got the Sunkist account if they want it, Don tells him to let it go because Ted has the Ocean Spray account and it presents a conflict.  If you missed the episode you can read our full and detailed recap here.

Spoiler alert: If you’re one of those people who doesn’t like spoilers, stop reading now! We have some juicy spoilers for you about the season 6 episode 11 AMC’s “Mad Men.”

AMC official synopsis – On next week’s show in the Season 6 finale, Don has a problem.

Next week, the finale heats up when Ted faces his feelings for Peggy and kisses her. There is a dead body in a pool face down, wow I wonder who that is going to be. Don tells someone that he has to understand when it is over, most likely Ted regarding the Ocean Spray account. Pete yells at Bob that he told him he needed a nurse and he sent him a rapist. Ted professes his love to Peggy.

Mad Men Season 6, Episode 13 “In Care Of” airs on AMC on June 23rd, 2013. Check out the preview video from episode 13 HERE let us know in the comments below what you think of Mad Men season 6, so far?