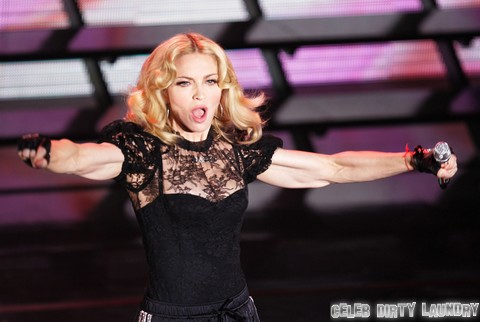 Once upon a time Madonna was best pals with Demi Moore. The two were inseparable. They were rooted and bound together by their Kabbalah beliefs and even hosted Oscar parties together. It seems somewhere along the way there must have been a big meltdown in their relationship because now, not only does Madonna take Ashton Kutcher’s side in their divorce battle, but she’s not hiding her favoritism either. According to the April 1st print edition of the GLOBE,

“Madonna is firmly on side Ashton. She adores him and thinks that out of him and Demi he’s the one with the glittering career. Also, Madonna loves having Ashton around as he’s great eye candy, he’s funny and he flirts outrageously with her — In Madonna’s eyes, there’s no competition – when it comes to picking sides Ashton is the obvious winner

Well, of course Madonna picks the hot (kinda) guy over any woman! That aside I think she has watched with the rest of the world as Demi has really cemented that she’s a special kind of crazy. You can only stand by someone like that for so long until they either reflect badly on you or drag you down with them. Plus after splitting a year and a half ago, it’s pretty clear that Demi is still stuck in exactly the same place while Ashton has obviously moved on. Eventually you end up supporting the more normal of the two and that most certainly is Ashton.

Do you think Demi will ever get tired of making his life and this divorce difficult? Or has it become her life mission to keep him as stuck legally as she feels emotionally? Tell us your thoughts in the comments below!