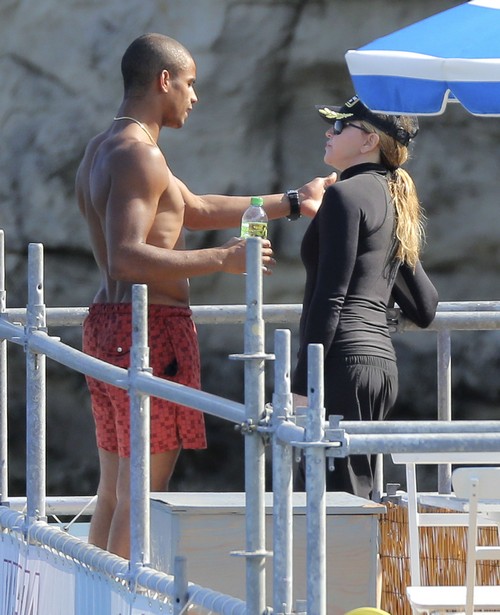 According to numerous reports, 55-year-old Madonna has broken up with her 25-year-old boyfriend [and rumored fiance], Brahim Zaibat. The couple had been dating for more than three years, and although Madonna’s rep confirms the split, they also refuse to confirm the reason for the split.

But really, it’s not hard to guess. Madonna’s always defended the age difference between her and Brahim, but after a while, anybody can guess that it gets tedious. Madonna may act immature for her age and she may be desperately clinging to her youth and glory days, but there’s only so much she can fool herself – both with her increasingly younger boyfriends and increasingly extreme plastic surgery.

Madonna and Brahim started dating in 2010, and the duo met through Madonna’s singing career and Brahim’s dancing one. Madonna claimed earlier this year that she and Brahim behaved like other normal couple, in response to the criticism over their age difference. But it’s not a laughing matter that every single one of her boyfriends over the past decade have been significantly younger than her, and it does speak to her fragile psyche a bit to know that.

Alas, this breakup might actually be a sign of a more mature Madonna doing the right thing. She knows there’s no future with the boy, so she’s spared him. In fact, it’s quite telling that the rep stated that Madonna broke off the relationship, not the usual party line of an ‘amicable’ breakup that’s all the rage with Hollywood couples.

What do you guys think about the split? Let us know your thoughts in the comments.