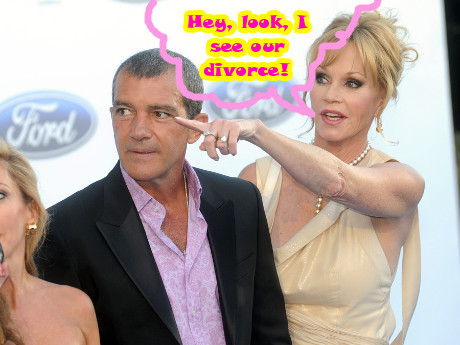 It truly does seem to be the season for Hollywood splits doesn’t it? Fresh off of hearing about trouble in paradise for Michael Douglas and Catherine Zeta Jones, Clint Eastwood, and Dina Riuz and even Faith Hill and Tim McGraw, it seems there is another long time couple on the brink of divorce. Antonio Banderas and Melanie Griffith married back in 1996 and their romance rarely seems to have been a smooth ride.

Melanie has battled her worst enemy- herself- on a regular basis. She has been insecure about being with such an attractive man and has been in and out of rehab on a regular basis do to her addiction problems. Being married to Melanie is hardly easy and now according to the Sept. 16th print edition of Star magazine, Antonio has simply had enough.

When Melanie isn’t crippled by her substance abuse problem she’s a huge diva and Antonio is really tired of being with someone that is nonstop selfish. Every issue she has puts all of the attention on her rather than them as a couple and Antonio is tired of feeling like he’s not an equal participant in his marriage.

Do you think that Antonio and Melanie are headed for a split? Tell us your thoughts in the comments below!