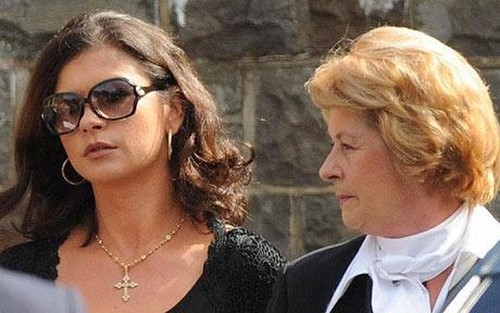 I guess after several months apart Michael Douglas really is serious about winning back the love of his estranged wife, Catherine Zeta-Jones. The couple admitted that they had separated over the summer and since then we have seen Michael out and about while Catherine was laying low. He seemed to be doing pretty well all things considered but now it seems that it is Michael who is struggling. At first he was happy to be off the crazy train but now he misses his family. He also sees how not being involved in his grown son Cameron’s life may have ultimately caused him to turn to drugs. Michael is insisting that he needs to remain super involved with Catherine and their children.

According to the Dec. 16th print edition of National Enquirer Michael has recruited an unlikely ally, Catherine’s Welsh mother, Patricia Fair. While she has never been Michael’s biggest fan, she has been impressed by her son-in-law’s efforts to keep the family together. She watches as he visits the Central Park penthouse twice a day to make breakfast for the kids and then to watch TV with them at night. While Catherine still isn’t sure whether or not she can forgive Michael for telling the world about how her HPV gave him cancer, her mother has taken notice of his devotion to the children. Michael has persuaded Pat to talk to Catherine and to try and make her see that divorce would be a mistake.

I have a feeling we will ultimately see Michael and Catherine back on the red carpet together. I think that if it was really done then we would know it by now. All of these steps towards reconciliation will probably pay off, don’t you think? Tell us in the comments below!