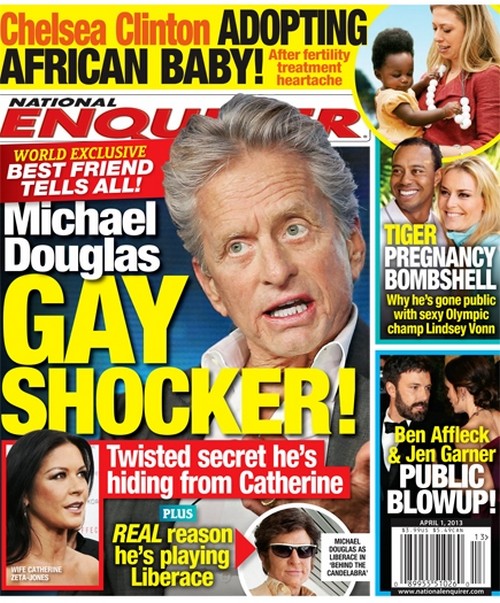 This might have come as quite the surprise to Catherine Zeta-Jones, but apparently her husband Michael Douglas is gay! Who could’ve seen that one coming, right?

It’s really not that much of a surprise that he could be gay, considering that there have been plenty of rumors surrounding their marriage as of late. She’s bipolar/crazy and he’s hooking up with guys…seems legit.

According to the latest cover of the National Enquirer, Michael’s best friend has ratted him out in this world exclusive story. The tabloid is reporting that Michael is gay and that there is some kind of dark and twisted secret that he is hiding from his wife Catherine.

I’m not sure if we’re buying the gay rumors without hearing his coming out speech for ourselves. When Catherine realized she’s crazy, she told the world of her personal issues. Why would Michael want to keep that secret? Why would she stay with him if he’s gay anyway? We are perplexed by this stuff, aren’t you?

What do you think of the tabloid’s report that Michael Douglas is gay? Sound off with your thoughts in the comments section below!