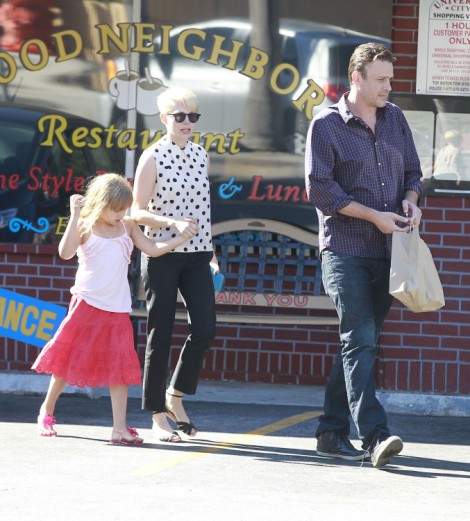 So we were all pretty surprised and bummed when Michelle Williams split with Jason Segel about a month ago. They blamed bi-coastal living as the main reason which was bullshit since they had been dating for a year and seemed pretty content with the arrangement – Jason especially. You heard rumors that he was super infatuated and ready to adopt Michelle’s seven-year-old daughter with Heath Ledger, Matilda Ledger. He was definitely all in. But sources are chatting that Matilda is actually the reason why Michelle had to pull the plug in the end because he could very well be a sex addict. Jason Segel apparently has some uncontrollable urges for sex and alcohol and Michelle didn’t want her kid in that environment especially with her history with Heath.

I heard about this blind vice a little while ago on Lainey Gossip. At the time she wrote: “In addition to his relationship with alcohol though, he also had an unconventional relationship with sex. Think…Michael Fassbender in Shame. Along those lines. Though he was faithful to her, totally, there are addiction issues he clearly has to address. And he’s doing that now, going to meetings, reaching out to another celebrity in recovery with whom he’s worked, as some of their issues are quite similar. He’s almost a month sober now and, yes, he’s doing it, in part, to get her back which… well… they know that’s not the way, don’t they? A few people close to him don’t think he’s really taking it seriously if he hasn’t committed to rehab. And she can see that too. For her, this is permanent, even though he doesn’t seem to be able to accept it.”

Now magazine has a new story out today about the Jason Segel/alcohol angle so it didn’t take much to put two and two together. Are you curious about the celebrity Jason reached out to? It has to be Russell Brand. They worked together on Forgetting Sarah Marshall and Russell has been nothing but open about his issues.

So this sounds like a done deal, right? A lot of people thought she’d give him another chance but it seems like she’s walked away for good. She’s not playing around. But can you blame her? She has to think about that kid and keeping a recovering sex addict/heavy drinker around the house might not be the best decision. Interesting that Lainey likened Jason to Fassbender in Shame. Have you seen Shame? That shit’s f-cked up. I couldn’t handle it that’s for damn sure.

Are you shocked by this or are you calling bullshit? Could the lovable teddy bear Jason Segel be addicted to sex or am I off the mark? Any other ideas for the blind vice?