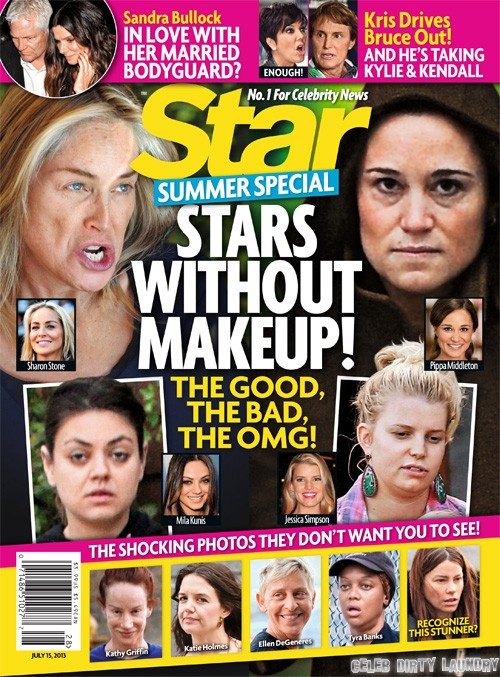 Seeing celebrities without makeup and then with makeup is certainly a confidence booster for most of us normal folk, especially when you see stunners like Mila Kunis and Sofia Vergara on the list. Hollywood makeup and lighting does a LOT for celebrities, and you can never really tell how much until you see them in the harsh glare of paparazzi cameras without a stitch of makeup on their faces.

The two other stories on Star’s cover includes Sandra Bullock falling in love with her married bodyguard [!] and Kris Jenner driving Bruce Jenner out of the house, with him supposedly taking Kylie and Kendall with him.

Drama, drama. Sandra hasn’t been linked to any men in a while, so I suppose the tabloids had to come up with something since her movie The Heat was a huge success this weekend. And the Kris Jenner/Bruce Jenner tabloid drama is never ending, although Bruce moving out of the house and taking the girls with him is a new twist on the usual story. For the record, I doubt Bruce would ever move out of the house but if he does, Kendall and Kylie would probably be a lot better off with him than with that famewhore momager Kris Jenner.