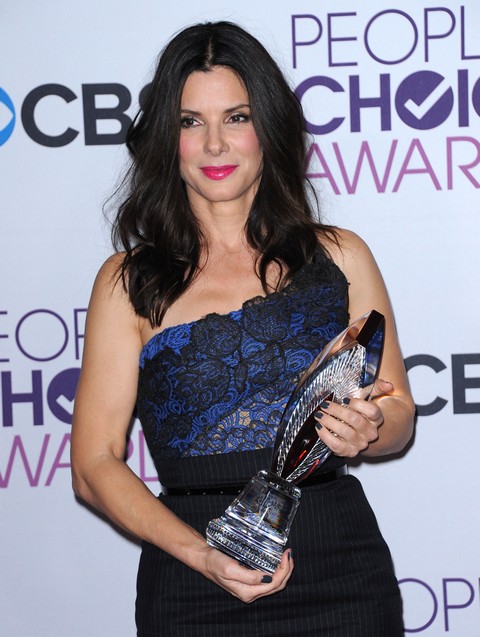 Since her split from first class freak Jesse James, Sandra Bullock has been on the hunt for true love. We previously reported that her son has found a father figure in her personal bodyguard, but the married man can’t be anything more than a substitute dad. Fortunately, Sandra has hilarious gal pal Melissa McCarthey to turn to for relationship advice and blind dates.

A source reported to Star Magazine, print edition January 21, 2013, “Melissa and Sandra hang out often because their kids are friends. Sandra has met a few men, thanks to Melissa, and they even went on a double date in early Decemeber.” Sandra and Melissa became friends while on location in Boston filming The Heat, and Sandra realized that Melissa and husband Ben Falcone have what she wants: a life long romance. The couple looks sincerely happy and Sandra is taking notes!

Melissa has already hooked Sandra up with “nonfamous friends, including a farmer from Melissa’s hometown in Illinois and a crew member from her TV series.” But nothing has stuck so far, and Sandra remains single. Fortunately, response to movie trailers for The Heat has been good, so the two will be spending even more time together on screen. “The chemistry just comes through” on screen, their director praised.

We’ve read other reports in which sources claim that Sandra has a lot of personal baggage to sort through before she can hope to start a healthy relationship, so we hope this new chapter is a sign of her psychiatric health! With a funny, kind friend like Melissa (or so she seemed when I saw her on Ellen!) Sandra can’t go wrong. Melissa will keep her grounded, and hopefully introduce her to some people outside of her normal neo-Nazi dating pool! Do you think Sandra is one step closer to find love?