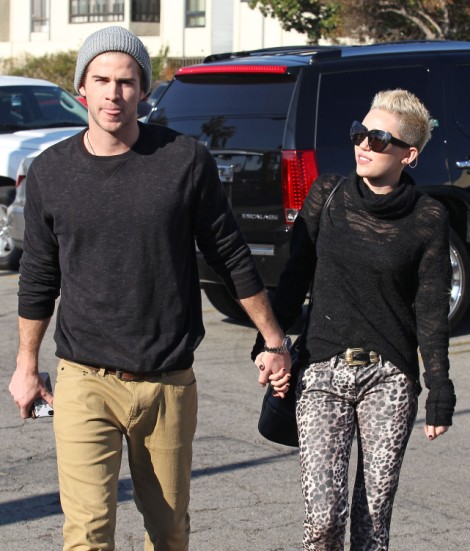 I think the whole world was worried about a quickie divorce the second that kid put a ring on her finger but why kick a horse when it’s down.

Miley Cyrus’ long engagement just got a little longer. According to Life & Style, Miley’s wedding to Liam Hemsworth is officially on hold. Well that’s not so bad, right? On hold is definitely better than over. The couple was reportedly supposed to make their everlasting love official this June in Palm Springs but sources confirm they are waiting so they can work through their issues. The issues in question are Liam’s habit of making out with girls who aren’t his fiance and Miley’s love of all things attention.

The family’s are totally down with this decision. “They aren’t ready,” an insider told the mag. “Their families are both concerned. They don’t want to see Miley and Liam get married and then get divorced. They’re very young to be getting married.”

Chris Hemsworth’s wife, Elsa Pataky, even got in on the will they or won’t they marry action. She recently told reporters: “I don’t know. If they get married, it would be nice to go [to their wedding.” That definitely doesn’t sound good but English isn’t Elsa’s first language so  perhaps we should take that quote with a grain of salt.

So they’re waiting. Good. That’s smart and mature. If they manage to get out of this hiccup together then they’ll definitely be tighter than ever. All relationships have issues. Their issues are just more intense under the media spotlight. I don’t envy that one bit. If Miley Cyrus’ engagement is worth it, it shouldn’t matter how long it lasts especially since she’s so young. Still, I wonder who’s holding on tighter? Do you think this is something they both want or are they just too scared to let go and see what else is out there? Will the Miley Cyrus/Liam Hemsworth wedding ever happen?