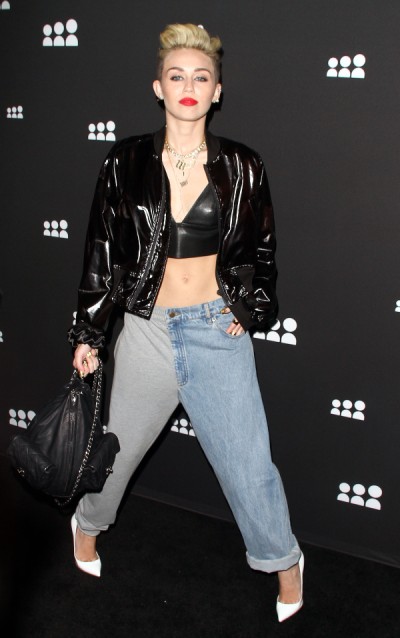 Thanks to the new awe-inspiring efforts by the Ying Yang Twins, Miley Cyrus’ ass just got a whole lot more interesting. It got its own song! And why the hell not? Miley Cyrus twerks all over town like it’s her business now. Let her ass have its due. It’s had a rough couple of months.

It all came to a creative head when the YYT found out that Miley was a fan on twitter and voila – a masterpiece was born! They told TMZ: “Our fans have been starving for some authentic twerk music. Seeing that Miley Cyrus wants to show the world she is grown by twerking, we decided to give her a little help.”

You can listen to the song in its entirety on TMZ but here is just a little taste of some of those soon to be classic lines.

Do the Miley Cyrus rock wit it
Wiggle wiggle jiggle jiggle shake that s**t
All the n***as saying can she take that d**k?

Miley Cyrus, ooh she wildin’
The way she shake her ass keep a n***a smiling’

Keeping it classy, yes? If Liam Hemsworth wasn’t convinced before that this was the woman to raise his children then he surely is now.  True, it’s not like Miley asked these dudes to write this about her but I have a feeling she’s more flattered than anything. You don’t go around town wearing what she’s wearing and acting like she’s acting unless you want this kind of attention. You don’t hump floors in white spandex pants because you’re feeling uncommonly shy that day. Mission accomplished! Her ass got a song. It is a catchy little number, isn’t it?