Miley Cyrus Caught In Bed With Harry Styles: How Will Taylor Swift React to the Scandal? 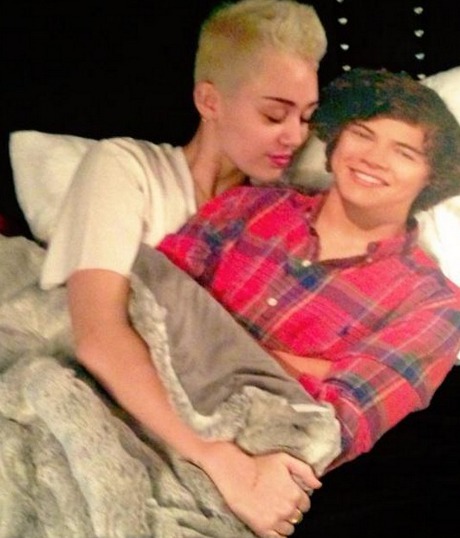 Miley Cyrus was in bed with Harry Styles recently. They held one another and stared into the distance like love struck teenagers with too much time on their hands. Before you lambast us with scathing comments below this post, let’s first explain to you what we’re talking about. Cyrus was in bed with Styles, yes, but it wasn’t Styles in all of his fleshy glory. It was actually a cardboard cutout of the One Direction vocalist.  Cyrus tweeted alongside the picture, “All I want for my birrffffday is a big booty hoe. All @noahcyrus wants for her BIRFFFDAY is @harry_styles.”

After this first in-bed-with-cardboard photo, Cyrus tweeted a second picture of her and her sister kissing Styles on the cheek. It’s a bit weird, actually, but strangely interesting nonetheless. Seeing that Taylor Swift just broke up with Harry, it’s perturbing to see one of her good friends hanging around in bed with a cardboard cutout of her ex. Seriously? Who does that? Cyrus cleared up any Harry-crush confusion on Twitter when she wrote, “In no way do I want Harry. No offense. I’m sure that’ll be a story now too. I’m happily engaged. Just got saucy with a cardboard cutout.” We get that, Miley, we do, but doing this whole Barry White thing with your friend’s ex just cannot be normal, at all.

Cyrus also shared an image on Twitter of a Harry Styles bobble-head doll that her sister owns. In Miley’s words, this doll was “creepy”. Well, if that thing had to stare back at us while we were sleeping, we would have had some pretty messed up dreams…

What do you think Celeb Dirty Laundry readers? Do you think Miley is being a bitch? Miley Cyrus/Harry Styles cardboard cutout: weird, or just weird enough? Or do you think it was harmless fun? Let us know your thoughts in the comments below.