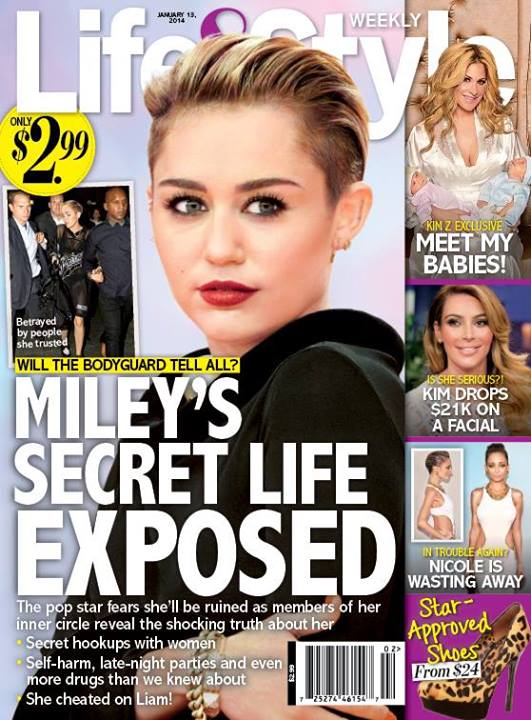 2013 brought us a lot of Miley Cyrus drama but, just because the year’s over, that doesn’t mean she’s going to put a stop to her scandalous ways. We see her wild behavior on camera, in places like awards shows and in the tabloids, but some people are saying that what fans see is only the surface of her life and that, actually, she’s even more out-of-control than many were led to believe.

In the January 13th edition of Life & Style, the magazine leads with a giant cover story exclaiming, “Miley’s Secret Life Exposed” and asks if her bodyguard might have the guts to write a tell-all book revealing everything he’s seen behind-the-scenes. A lot of people aren’t crazy about tell-alls, but I have a feeling a tell-all regarding Miley’s life would fly off the shelves quicker than a Kardashian can file for divorce.

The mag also claims that Miley reveals “she’ll be ruined as members of her inner circle reveal the shocking truth about her: secret hookups with women, self-harm, late night parties, more drugs than anyone knew about, and [the fact] she cheated on Liam [Hemsworth].” Wow, sounds like quite the story. Here’s the thing, do you think Miley really would care about all this? The way her career is going, a tell-all that reveals more scandal would probably inflate her appeal tenfold.

“Engaging in bad behavior in front of people the way Miley does is like playing Russian roulette,” an insider exclusively tells Life & Style. “It’s just a matter of time before one of her so-called friends attempts to sell her out.”

Let us know what you think about Miley Cyrus’ current situation in the comments section below, and don’t forget to pick up this edition of L&S, which also features stories on Kim Zolciak’s new twins and Kim Kardashian’s $21,000 facial (the perfect holiday gift for your loved one).