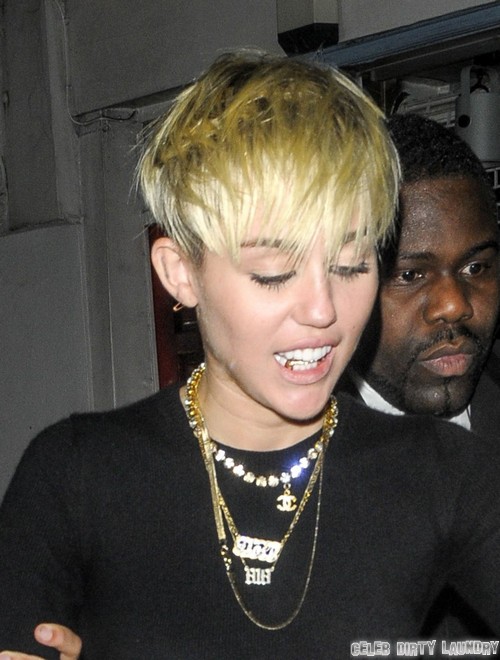 What on earth is going on with Miley Cyrus? If we didn’t know any better, we’d say that she’s stopped caring about her audience. Even though Miley’s audience has been growing older with her, a large number of her fans are still young adults and teenagers. Ostensibly, she’s still trying to keep those fans – you would think.

However, Miley’s pretty much admitted that her new song ‘We Can’t Stop’ is about ecstasy. When the song first played, it definitely sounded like that. There was a lot of criticism over the song’s supposed reference to MDMA [aka the lyrics that refer to ‘dancing with molly’], but Miley revealed that she and her producer lied about the lyrics to get the song on the radio.

They stated that the lyric was ‘dancing with Miley’, not Molly, but Miley says that’s not necessarily true. She told the Daily Mail, “If you’re aged ten [the lyric is] Miley. If you know what I’m talking about then you know. I just wanted it to be played on the radio and they’ve already had to edit it so much. I don’t think people have a hard time understanding that I’ve grown up. You can Google me and you know what I’m up to — you know what the lyric is saying.”

What do you guys think about Miley’s revelation? She has to know that by admitting this, she’s alienating an entire sect of viewers who will not be allowed to listen to her music anymore – at least, if the interview goes viral and their parents see it. However, she does state that she’s grown up now, and it’s true that these people can see her partying on the Internet just as easily. So does it make a difference? Let us know what you think in the comments.