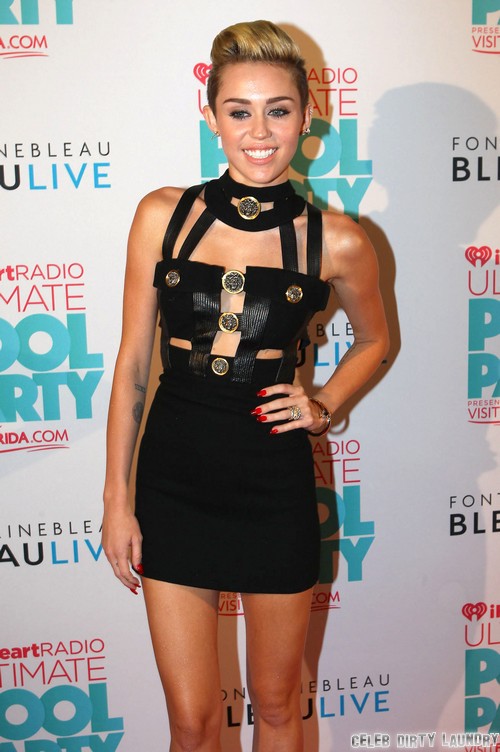 Is Miley Cyrus ‘wasting away’ at 98 pounds? According to a new report from Life & Style Magazine, the stress from her on-again/off-again relationship with Liam Hemsworth and her parents’ divorce has been causing Miley to lose weight at a drastic pace, causing her to look like she’s ‘wasting away’.

According to a supposed fitness expert, “[Miley has the frame of a prepubescent child, not a 20-year-old woman,” adding that Miley probably only weights 98 pounds. Wow – that’s a pretty specific number for a ‘fitness expert’ to name without ever meeting Miley in person.

A source close to Miley also reportedly told Life and Style, “She’s barely eating. It’s really unhealthy. She’s dealing with so much stress right now.” That, I believe. The poor girl has been working non-stop for the last couple of months to finish her album on time and then promote it, and she’s had to deal with so much personal turmoil at the same time. It would make anyone stressed out and lose weight, and I’m sure it’s affected Miley to some degree.

However – as someone who has a working understanding of BMIs and what is considered ‘healthy’ and ‘unhealthy’, I can guarantee that Miley is not ‘wasting away’. Her body type has always been svelte, but she’s actually gained some incredible muscle definition over the past few months, and her body looks toned – not ‘emaciated’.

I’m sure a lower food intake contributed to her losing weight at a faster pace, but it’s clear that this girl exercises like there’s no tomorrow. She’s spoken of her love for pilates and dancing, and she definitely has the kind of body that proves that she’s not lying. So I’m calling BS on this story folks, at least we actually get pictures of Miley looking like she’s actually ‘wasting away’.

Miley looking mighty thin and boney at the Fontainbleu Miami Beach in Miami, Florida on June 29, 2013.