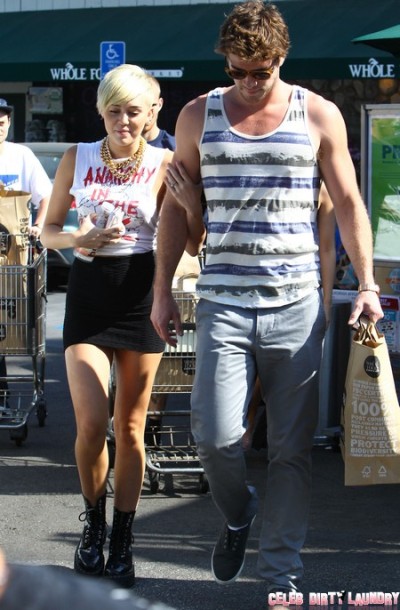 In the imaginary world where I mostly hang out and Miley Cyrus and I chat from time to time about boys, hair and our dogs I’d like to think she’d be too good for this story. She’s grown up so much in the last year. I just want to see her take this shitty break up like a big girl and move on. Plotting revenge is so Demi Moore and Kris Humphries. But I have to remember, Miley is still a former child star and still very, very young. Maturity can be fleeting.

Especially when the media is pretty much blaming you for your boyfriend cheating. Did you catch that? Either Liam Hemsworth has a very good PR team or he’s a major douche (could be both) because he’s coming out gangbusters in this split. While he’s chilling in Australia the media is leaking info that it was Miley’s partying ways and new radical, masculine hair that drove Liam to allegedly stray with January Jones.

“They were always arguing about the company she kept and her actions with alcohol and stuff, and it made him especially uncomfortable when he was not home to supervise,” a source told Radar Online. “Plus, Miley isn’t looking so fierce these days and Liam hasn’t really been feeling her look. They’ll probably end up together, but Miley is just giving him hell right now and trying to publicly humiliate him.”

Apparently his people have been behind a split for awhile now because Miley was bad for his image. Their relationship took up too much time in interviews when he would rather have been talking about “the work”. Oh, really? I can kind of see where his management is coming from. Liam is a hot, young, up-and-coming actor with a major franchise under his belt, it would probably be more lucrative and entertaining to have a love affair with Jennifer Lawrence or some other hot star. Miley gets attention but it hasn’t been for “the work” lately. Still, shitty reasons (if they’re true) to cheat (if he even cheated). I have a feeling he didn’t really cheat but it might have been too close for comfort with Miley so she shipped him off to surf so she could have some alone time.

Regardless, Liam’s young and he exhibited douchey behavior. I actually appreciate it. The main problem with The Hunger Games is I couldn’t get a warm feeling for Josh Hutcherson’s Peeta when Liam was around. Maybe this will help cement Josh as a viable love interest in the second movie instead of an annoying whiny little boy character. It’s truly sad that I think about these things.

Is this the end for Liam Hemsworth and Miley Cyrus? Revenge is not the best way to get a relationship back on track but should it be salvaged anyway? Also, are you looking at Liam in a different light now? Where’s the hotness factor now?