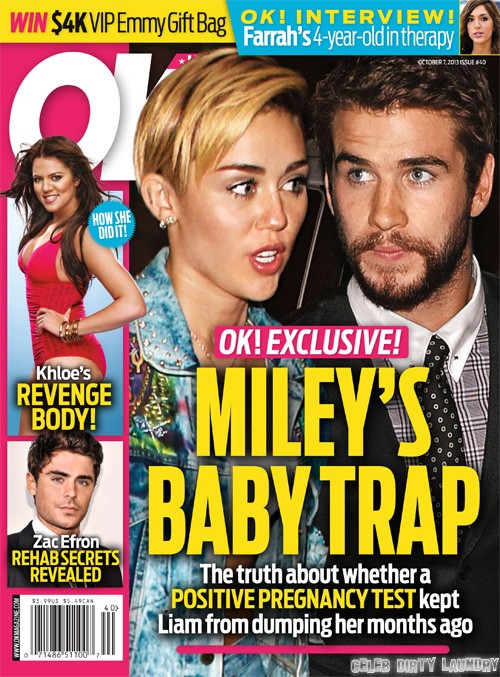 According to an exclusive new report from OK! Magazine, the real reason Liam Hemsworth and Miley Cyrus didn’t break up months ago is because of a pregnancy test. Dun dun dun.

You know, I agree that there had to be a reason that Miley and Liam didn’t break up earlier, but I always assumed it was because Miley refused to let go. Liam was going around, grinding up on other women and having a ball of a time at the beginning of this year, and he and Miley have pretty much been on the rocks since then. So why wait until almost the end of the year to break up? Apparently, it was because a ‘positive home pregnancy test changed everything’.

A source explained, “Miley thought she was expecting and wanted to announce it to the world, even before she went to a doctor to verify the results. Liam begged her not to go public yet. He was emotionally out of the romance for months by that point, though he was still sleeping with her.”

The source adds, “Miley essentially trapped Liam in the relationship, telling him that if he left her alone, she’d tell the world that he had abandoned her at such a delicate time.”

Ok, while it’s not impossible that this story is true, why is is that every report about Miley’s and Liam’s breakup has been pro-Liam? His team is obviously working overtime to try to make him look like the bigger person in this breakup, and Miley’s recent controversies are only helping him do that. But consider the fact that Liam was the first one to check out of the relationship, way before Miley was supposedly ‘pregnant’ – what’s the explanation there? And even if he did stay with her because she ‘trapped’ him, is it right to hook up with other people when your fiance could be pregnant?