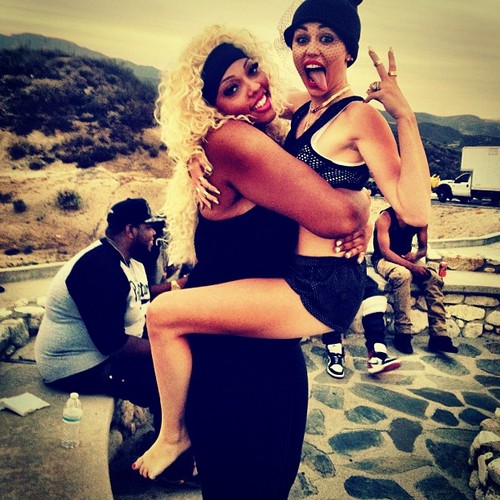 Miley Cyrus doesn’t seem to be content with the backlash her twerking and raunchy photoshoots are engendering. Instead, she’s decided to take it a few steps further and advocate drugs in a recent interview. Does she not realize that she still has young fans that are easily influenced, and she has a responsibility to these fans to remain a good role model? Clearly not, if her comments are anything to go bye.

Miley seems to take no qualms in admitting that she freely partakes in drug use, explaining, “I think weed is the best drug on earth! One time I smoked a joint with peyote in it, and I saw a wolf howling at the moon.” As if that wasn’t bad enough, she then added, “Hollywood is a coke town, but weed is so much better. And molly too. Those are happy drugs, social drugs. They make you want to be with friends. You’re out in the open. You’re not in a bathroom. I really don’t like coke. It’s so gross and dark. It’s like, ‘What are you, from the 90s? Ew.’”

Seriously?! Does she even hear herself? She’s not even 21 years old, and here she is, advocating kids to take molly because it’s a ‘social drug’ and will make you ‘happy’. Maybe she doesn’t realize this, but Molly killed several party-goers last year because they overdosed. Sure, weed might be an exception and there’s plenty of people that advocate it. But by revealing that she’s tried pot, cocaine, and molly, she’s pretty much telling her fans to go out there and party as much as she does.

In her desperate attempt to distance herself from her Disney image, Miley seems to forget that she still has fans that are very susceptible to following their celebrity role models. It’s just a sad commentary on Miley’s current state in the media that she doesn’t even realize that.

What do you guys think about Miley’s comments? Let us know your thoughts in the comments.