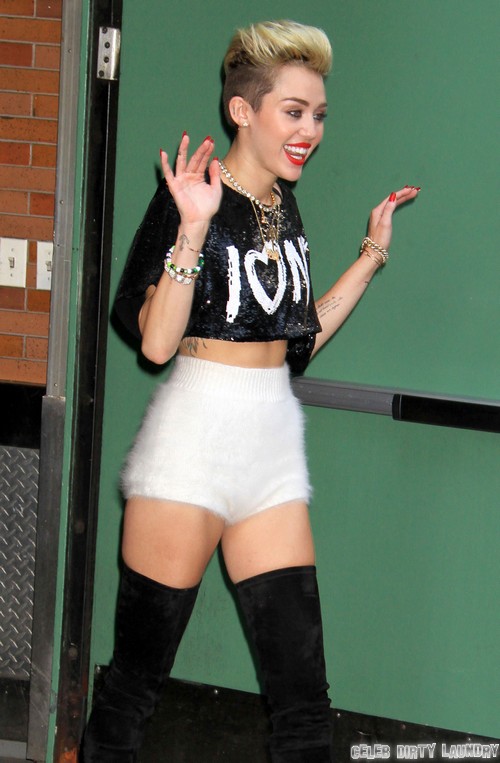 Miley Cyrus recently stated in an interview that her style was a combination of ‘white trash’ and Chanel. At least she’s honest about it?

In an interview with MTV, Miley spoke about how she manages to look so dressed down and ‘white trash’, explaining, “It takes a lot of money to look this cheap.” She also added, “You can just mix white trash and Chanel, that’s me. That’s my ultimate look.”

Well, considering that most of our outfits these days consist of torn or see-through clothes with massive amount of jewelry, I agree with her assessment. However, I don’t think she understands that calling herself ‘white trash’ just for wearing those types of outfits is insulting to people who actually dress like that. Also, she should think twice about using ‘white trash’ when considering some of the people in her circle.

Obviously, I don’t think she’s trying to be offensive, but I feel like lately, all she’s been trying to do is prove a point. Her dressing, her  behavior, her ‘I don’t give a f***’ attitude – it was such a sudden and drastic transformation that you can’t help but think that there’s something else behind all the facade. Is it her relationship troubles with her on-again/off-again boyfriend/fiance Liam Hemsworth? Is it her relationship with her parents and family? Or is it just that all those years of being a Disney kid just exploded all at once?

I can’t really say because I don’t know Miley, but even some people who know her seem to be surprised. We’ll just have to wait and see whether this is a phase, or if is legitimately Miley’s new ‘persona’. What do you guys think? Let us know in the comments.