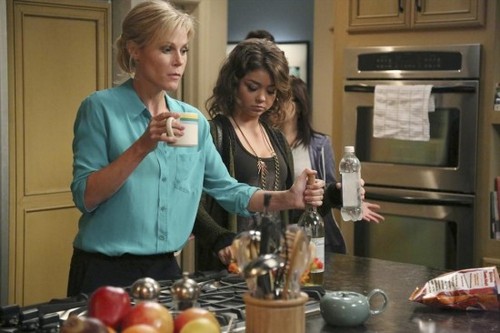 Tonight is ABC’s hit show Modern Family  continues with another new episode called ‘’The Late Show.”    On tonight’s show Mitch and Cam end up putting on the same outfit.  Did you watch last week’s two-hour season premiere?  We did and we recapped it right here for you.

On last week’s episode Cameron’s older, single sister Pam (guest star Dana Powell) was coming for a visit, and Cam was in a panic to hide the engagement until he could delicately break the news to her, but it turned out she has news of her own. Phil and Claire made a joint, guilt-ridden decision to miss one of Luke’s soccer games – that is – until one of them went behind the other’s back, and Gloria was in denial that she might need reading glasses.

On tonight’s show Jay pulled a lot of strings to get reservations at the hottest new restaurant for a family adult’s night out. Unfortunately, in each household everyone is running late – Gloria is taking forever to get ready per usual, Claire and Phil get in a tiff about letting Luke stay home alone, and Mitch and Cam end up putting on the same outfit.

RECAP: Mitchell and Cameron are going out, Cameron can’t decide what he wants to wear and is slowing them down. Jay is waiting for Gloria, they are going out to dinner. Manny tells Jay that Gloria isn’t there, she’s getting her hair done. Gloria finally arrives and tells Jay she is late because there was a dip in the road.

Luke wants to stay home alone, but Claire doesn’t want him to, Phil is ok with it though.

Gloria wants a compliment from Jay, but it is Haley that tells her that her hair looks great before they go out. Jay then tells Gloria that new earrings will tie the whole outfit in.

Claire gives Luke a whole emergency drill before letting him stay home alone. Phil is wearing a new suit, he barely could get into it and if he bends down it is going to split.

Cameron and Mitchel have agreed tat both of them will change, Cameron is taking forever and Mitchell says he is doing it on purpose so he can stay in the outfit and Mitchell will be the one to change.

Claire tries to test Luke and returns to the house, he uses a toy gun to protect himself.

Gloria is finally ready, she tries to go back to get something and Jay loses it. When Jay and Gloria arrive at the restaurant, they are the first there and Gloria is annoyed that she could have gone back to get what she wanted. Jay and Gloria get into an argument, but then finally Cameron and Mitchell arrive. Phil and Claire arrive, then Gloria makes her grand entrance. Meanwhile Haley is watching the kids and having fun singing “Midnight Train to Georgia”. Cameron and Mitchell go out for fresh air, they talk about wearing the same outfits and try to clear the air between them.

Mitchell and Cameron go back into the restaurant and everyone is happy they are there.

Haley is bonding with Lilly.

Phil and Claire go outside to clear the air as well, Phil asks Claire if she likes the suit, he squeezed himself into it because she has been so busy at work and ignoring him. Claire tells Phil that he is really hot in the suit.

Jay just wants to go to his table, the hostess tells him that she gave away the table because his guests kept going outside. Gloria loses it, she tells off the hostess and ends up getting them all kicked out of the restaurant. Dinner ends up being tacos from a food truck and Phil’s suit finally gives up and rips. Jay starts singing “Midnight Train to Georgia” using a beer bottle as a mic, everyone joins in. This really is a heartwarming episode, love how all the families came together.