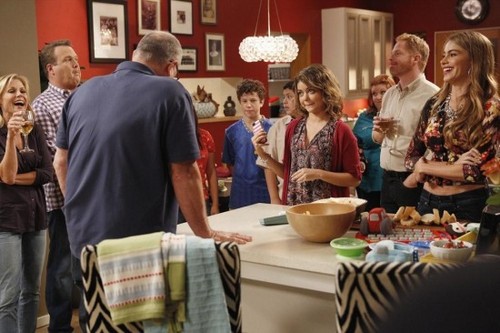 Tonight is ABC’s hit show Modern Family  continues with another new episode called ‘’Farm Strong.”    On tonight’s show Gloria is in denial that she might need reading glasses.  Did you watch last week’s two-hour season premiere?  We did and we recapped it right here for you.

On last week’s Phil seemed to have found his wheelhouse in real estate – recently divorced women – but it took up a lot of his time. Meanwhile, Luke invited his buddies over for a high-stakes poker game in the basement; Gloria thought baby Joe might be cursed; and Cam held an elaborate pet funeral for Larry the cat’s made-up wife — all for Lily’s sake.

On tonight’s show Cameron’s older, single sister Pam (guest star Dana Powell) is coming for a visit, and Cam is in a panic to hide the engagement until he can delicately break the news to her, but it turns out she has news of her own. Phil and Claire make a joint, guilt-ridden decision to miss one of Luke’s soccer games – that is – until one of them goes behind the other’s back, and Gloria is in denial that she might need reading glasses.

RECAP:  Phil and Claire are talking about Luke’s joining soccer and sitting on the bench all the time, the best play he has had is when he stopped the ball with his face. Claire doesn’t want to go to the games anymore, she is working now and really needs her weekend to catch up on errands. Phil is against not going, he doesn’t think it is right but for Claire, he gives in.

Pam is vising Mitchell and Cameron, Pam tells them that this girl they knew is pregnant with ugly twins.

Claire mentions to Luke that he should go to the game by himself, he says ok and he will get a ride from Max. Claire is thrilled.
Jay and Manny are folding onesies when Gloria comes in from the doctors, she tells Jay that everything is ok but he is sure she needs glasses.

Pam announces that she and Bo are getting married.

Claire gets her chores done early and ends up at the soccer tournament to watch Luke, she is surprised when she finds that he is paying well.

Phil is up on a ladder and cleaning the gutter with the “gutter done” device, he ends up killing a bird’s nest and the girls start to freak out.

Manny runs into the house with Jay who starts freaking out because he accidentally ate rat poison; he throws the box to Gloria and asks her to read it, she can’t. It was all a test and she is mad at Jay for doing that to her.

Pam’s phone rings and Cameron picks it up, he still has that old crush on him and enjoys the call but can’t believe that Bo is going to marry his sister. Pam overhears Cameron and she is mad at him. Pam says the whole family knew that Cameron wouldn’t accept it and he is week; the two get into a screaming match.

Phil calls Claire because the mother bird is up on the gutter looking for her babies and he is freaked out by it, all of a sudden there are more birds. Claire tells him not to worry, but Phil says they are terrible parents and should have went to the game. Meanwhile, Claire is still at the game and pretends she isn’t so Phil won’t know and she tells Luke not to tell his dad.

Cameron and Mitchell bring Pam over to Phil and Claire’s house, Luke walks in and Claire asks how was his game. Luke won’t tell Phil that he had the game of his life because he doesn’t want to make him feel bad.

Jay buys Gloria a gift to say sorry for the prank he pulled on her, she is thrilled until she finds that it is a pair of glasses; Gloria calls him an S.O.B.

The family proves that Cameron is sensitive and he gets upset, he tells Phil that Claire went to Luke’s game without him. Claire says she didn’t mean to but Luke was amazing. Phil is so happy for Luke but so made at Claire.

Mitchell goes to see Cameron and make him feel better, Pam joins them and says she is sorry for everything and tells him that she loves him. Cameron tells Pam that he should have congratulated her on her engagement to Bo.