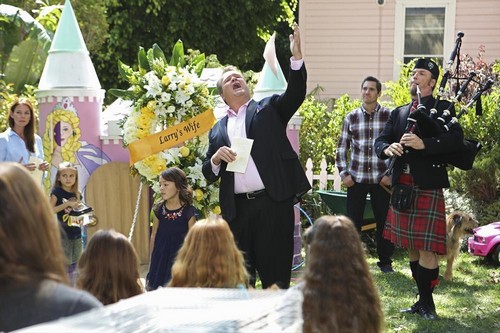 Tonight is ABC’s hit show Modern Family  returns with its fifth season premiere called ‘’First Days’  and on the season five opener it will be a one-hour special and it opens with something big, you’ll want to spend the hour with us.

Stand by, we will be live blogging the show at 9PM tonight with all the up-to-the-minute details.   The last time we saw Modern Family everyone flew down to Florida to be with Phil after his mom passed. Claire helped Phil with Gracie’s last wish for Frank, and the kids reflected on the gifts grandma left for them. Gloria had to contend with an outstanding arrest warrant in Florida, Cam found himself fitting right into an elderly women’s group at Frank’s retirement community, and Jay ran into a pivotal person from his past

On tonight’s show In the first half of the hour — “Suddenly, Last Summer” — the family is in the throes of summer activities: Phil and Claire are trying to orchestrate a kid-free week by coordinating Luke’s camp with Haley’s beach trip and Alex’s volunteering excursion; Jay and Gloria are getting Manny ready for his first solo trip back to Colombia; and Mitch and Cam make it a summer to remember. In the second half-hour – “First Days” — Luke and Manny have their first day at high school, which proves to be harder for Phil and Gloria than for the boys. Elsewhere, Claire makes her big return to the workforce at Jay’s closet company and is a little rusty on her first day, and Cam starts a new substituting gig at the high school, leaving Mitch to try to juggle Lily’s first day in 1st grade and a very important meeting at work.

Gay Marriage is legal! While Cam and Mitchell are both very happy and they can’t help but deal with their family craziness as everyone share in their happiness. Gloria wants Cam to go all out with a huge romantic proposal. The one Jay gave her left a lot to be desired. Even at this moment Jay has to make a trip down to the court house himself.

Manny is going on vacation to his native country, Columbia but his birth certificate has suddenly disappeared. Luckily he and Jay can make a quick trip to get another. Now if only a boy and old man weren’t standing in line along with a ton of gay couples. Of course people are going to eye them.

It’s Mitchell that wants to marry his gay lover. That is after Claire puts the idea in his head. Which was much later than Cameron had originally thought Mitchell was going to propose to him. When Mitchell called needing his wallet he really meant he needed his wallet. Yet when Cameron has seen through the window and the environment he thought he didn’t want to get engaged here and so he made a run for it.

Claire is the one that came through with the money to pay for Mitchell tea and that’s when she lay the groundwork in trying to help him propose. Still he won’t be taking advice from her. All of her suggestions are really weird. Maybe she should focus on helping Phil. It was again her idea. This time she set out a way that she could get all three of her children out of the house at the same time.

Phil can’t work Luke. Luke has a new girlfriend that does gymnastics and watch Dirt Dancing. Phil is too proud of his son’s achievement to mess that up so that his two daughters. He has to make their schedule fit Luke’s. How does he get them to do this? He plays on their worst fears. Becoming each other.

Later Phil and Claire are helping Mitchell with his proposal and at the same time Jay and Gloria are helping Cameron with his proposal. The two men have been dodging each other proposal in order to win Mr. Romantic by being the first to propose. Yet both of their plans look like it’s going to fail when they have to change their tire. Stuck out in the middle of nowhere with nothing but each other the couple jointly proposes.

The other two couples left hanging decided to get some romance into the day for themselves as well. Jay takes it upon himself with no outside help to propose to Gloria again. While Claire who actually tried to manage a kid and Phil free week changed her mind. She almost got Phil out of the house by going to his dad but changed her mind when she realizes how romantic he’s always been with her.

Summer comes to an end and the children have to go back to school but they aren’t the only ways facing change. Claire has got a job. Nothing too big or serious according to Hayley. Claire is after all working for Jay so how hard could it be. Well she dressed appropriately although her and told her she shouldn’t have baked cookies.

Cameron is also starting a new job. He was hired as substitute. Just one little problem he doesn’t know anything about the subject. US History is too boring for him. He tries to jazz it up by coming to class in costume. Sympathy is with Alex who’s in his class.

With half of the parents at work it’s up to the other half to make the school run. Phil and Gloria are sad about their boys starting High School they figure they might as well hang out. The place they chose to go for coffee has a small problem. It’s being used to film a commercial. Phil and Gloria can stay to have their coffee if they choose to be extras which they do.

However the director is quickly regretting his decision. Phil and Gloria are horrible actors and they were told to act normal. First they too loud and then Gloria starts talking into an imaginary phone. The whole situation was a mistake especially when the two thinks the director is stopping to them to tell them to do more.

Another mistake was hiring Claire. In the first 10 minutes at work he managed to befriend the office weirdo and have all of her co-worker thinks she’s dumb. They’ve already complained to Jay. Now to make it worse Claire found out her dad was going to fire her one friend. This going to be so hard for her.

Mitchell didn’t have a good school run. Lily ran into a brick pillar on his watch. His only option left is take Lily to work with him. She makes an interesting secretary. His boss comes in for a review Mitchel was right about to start when Hayley pays him a visit.

By the time his boss invited Hayley to Mexico, Mitchell had to put his foot down. It was going out of hand. Fortunately he was not fired for c*ck blocking.

Claire couldn’t help herself. She told her friend e was going to get fired. She had just listened as he talked about closing on a new house with a wife working on her masters. So she told him and then had to explain to Jay when their former IT guy shut down all the electrical.

Cameron did find a job that worked with him. It wasn’t being a History teacher or better yet sitting down while Alex taught his class. No Cameron was meant to be a football coach. This way his George Washington costume could finally be put into good use.