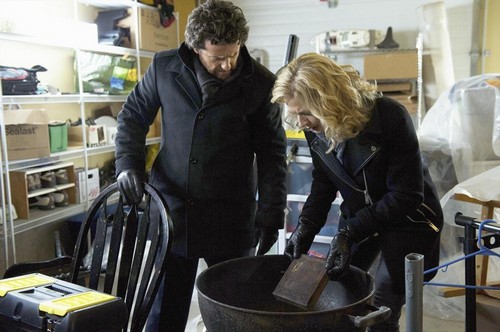 Tonight on ABC their new crime drama MOTIVE continues with a new episode called, “Public Enemy.”  On tonight’s show when a health food guru is found dead in his hot tub, detective Flynn and Vega pursued a trail of clues that lead them to a young women with a secret motive to kill.  Did you watch last week’s episode?  If you missed it and want to get get up, you can read our full and detailed recap here.

On last week’s show a high-priced lawyer was discovered murdered in his home, and while Detectives Flynn and Vega worked the case, Manny was arrested for vandalism.

On tonight’s show when a health food guru is found dead in his hot tub, Detectives Flynn and Vega pursue a trail of clues that lead them to a young woman with a secret motive to kill.

I cannot wait for tonight’s episode 5 of Motive last week’s episode 4 was really great.  The show airs tonight on ABC at 9 PM EST and we will be covering it with all the details.  So make sure to bookmark this spot, and come back for our live coverage of Motive Season 1 episode 5 right here.  Enjoy the show folks!  While you wait for the recap, check out the sneak peek of tonight’s episode below!

Tonight’s episode of Motive starts off completely messed up. Jack Bergin is a health food guru married to Lila. He also was somehow intertwined with a woman named Chloe who ultimately kills him. Jack was found dead in his hot tub while Lila was at the ballet. In true Motive style we get glimpses of Chloe checking out Bergin’s home which was for sale. She paused to look at photos of Lila before later following her and signing up for the same classes that Lila takes.

Chloe purposely got closer to Lila before killing Jack so that after his death Lila runs to her for support. Detectives Flynn and Vega arrive at Lila’s door to talk to her while Chloe listens in on them from the next room. After getting into the groove of how Motive tells its story, by showing flashbacks while flipping to figuring out the case, I kind of like it. When I start to get confused they hand me another old piece of story to make things make sense.

Flynn and Vega go over the sign in list from the open house at the Bergin’s and realize that Chloe did a walk through and they tip Lila off to the fact. Flynn also pays Chloe a visit at work and asks her why she never told Lila about checking out her home and Chloe says it would have felt weird. Lila drives home to find Chloe rummaging through her garage. She claims that she went to check on Lila and found her garage door open but Lila doesn’t seem to be buying it.

Flynn and Vega find something in Lila’s garage that causes them to bring Chloe in for questioning. They match Chloe’s prints and we see that in the box from the garage that there are pictures of Chloe bound and gagged along with many other victims. As it turns out Jack was her rapist and she hunted and tracked him down, using Lila to get close enough to kill him. We see Chloe confronting Jack and him apologizing before she electrocutes him in his hot tub. Tune in next week for another new Motive!