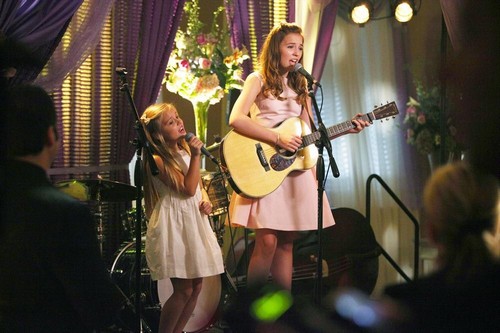 NASHVILLE continues on ABC tonight with a whole new episode called, “It Must Be You.” On tonight’s season 2 episode 7  as Teddy and Peggy’s wedding near, Maddie wants to connect with Deacon, Rayna draws closer to Luke Wheeler and Juliette goes to war with a lecherous DJ. Did you watch week’s episode?  We did and we recapped it here for you!

On last week’s episode Rayna sets the record straight on all things personal and professional in a candid interview with ABC News’ Robin Roberts. Determined to be her own boss, Rayna attended the Belle Meade Polo Match to seek out investors for her own label, Highway 65, but was surprised by the reaction from Nashville’s elite. Meanwhile, Juliette, who was also at the event, ran into Charlie Wentworth, and Luke Wheeler and Deacon had an awkward encounter. With her life about to change dramatically, Scarlett leanrf on Avery for advice, and Teddy announced to the press that he and Peggy were getting married.

On tonight’s show as Teddy’s wedding day nears, Maddie feels lost and tells Rayna she wants to get to know Deacon better, forcing Rayna to confront Deacon about stepping up to co-parent. Luke Wheeler (Will Chase, “Smash”) commiserates with Rayna about the challenges of exes and parenting.  While on tour in Texas, Juliette angers a lecherous but very influential radio DJ who starts promoting Layla at Juliette’s expense. Deacon tries to find his way back to music and discovers an unexpected ally in Avery. While on a date with Layla, Will runs into Brent on a date with a new man, and Gunnar finds himself in a power position in his singing and songwriting.

Tonight’s episode of Nashville opens with Juliette arriving in Houston, Texas for her sold-out show, with Leila in tow.

Rayna is trying to get Scarlett’s contract resolved with Luke, but he seems more interested in flirting with her than paperwork. Rayne needs to get her out of the studio though, because anything she records there belongs to the studio.

Rayna also has some things to resolve at home. Her daughters are less than thrilled about singing a song at their Dad’s upcoming wedding, and won’t practice. She reveals to her sister that her daughters still don’t know Ted and Peggy are having a baby.

Deacon wakes up to find Avery in the house, and is less than thrilled. Avery rushes out and leaves Scarlett to explain their relationship, or friends-with-benefits-ship to her Uncle.

Gunnar and Zoey are discussing their living arrangements, and scared Scarlett could walk in on them when they are in bed. They are interrupted when he receives a phone call from a producer about his song, he sets up a meeting, and thinks his career is looking up.

Rayna breaks the news to Scarlett that she is going on Luke Wheeler’s tour. The contracts arrived and she is leaving in the morning. Scarlett is really nervous about going out on tour though.

Hayden is shocked when Charlie pays her a visit in Houston. He nonchalantly reveals that his wife Olivia is not with him in Houston. Juliette drags him into the nearest dressing room and has her way with him.

Rayna confides in her sister that Maddie wants to see her real Dad, Deacon. She realizes she is going to have to finally reach out and speak to him. She swallows her pride and pays Deacon a visit. Rayna asks Deacon how he feels about spending some time with Maddie, she also confesses that she is scared Deacon will let her down and hurt her. She asks him to take some time and think about whether he can or can’t be there for Maddie.

Teddy breaks the news to Peggy that Maddie doesn’t support their wedding, and he is considering postponing the wedding. Peggy won’t hear it, she thinks Maddie “is gonna be just fine.”

Deacon calls Avery over to his house. Avery thinks he is going to get chewed out for sleeping with Scarlett. He actually called him over to ask him to play guitar with him at an open-mic out of town. He doesn’t want any of his friends to play with him or see him performing, because he don’t think he’s ready to get back on stage. Avery agrees.

Leila is pressuring Will to spend more time with her, but he curtly reminds her their relationship is fake. He reluctantly agrees to go out to dinner with her.

Juliette blames Charlie for the press leaving her show. The pep-talk he gave her before her show inspired her to blow off “Santa Claus,” the Houston Media King who can’t keep his hands to himself.

Maddie is getting ready for the big wedding, Teddy tries to have a heart-to-heart with her, and asks her to give Peggy a chance. Maddie agrees to try.

Luke and Rayna are taking a tour of his property. Rayne reveals that she having a bad day because her ex is getting remarried. Luke encourages her to distract herself with some target-shooting. Bullets and romantic sparks are flying.

Juliette’s manager has a surprise for her, Santa Claus has been fired, apparently Charlie has more pull than anyone realized.

Avery and Deacon are headed to open-mic night, Avery is trying to convince him to go to their local bar to play instead of out of town. Deacon doesn’t want to hear it though. He is afraid of disappointing the people that know him.

Maddie swallows her pride, and decides to sing a song with Daphne at Teddy and Peggy’s wedding.

Juliette is less than pleased with Charlie for firing Santa Claus, she doesn’t want him fighting her battles for her.

Avery and Deacon arrive at the open-mic night, and realize that it is a comedy club and no one plays music there. Deacon decides that it is a sign that he shouldn’t be playing music yet. Rayna calls him and reveals that Maddie is home from the wedding and asking for him.

Gunnar receives a phone call from the producer, he has listened to his demo, and he thinks he has potential. He wants to send him out on the road on tour.

Gunnar ditches the comedy club and heads back to the Bluebird to perform, he invites Maddie and Rayna to watch. Gunnar and Deacon perform flawlessly, and Maddie is thrilled to see her Dad.

Juliette summons Santa Claus and threatens him with Charlie’s power. She tells him that if he doesn’t give her twice as much air time as Leila she will have him fired again.

Will is struggling with his inner demons, and decides to sleep with Leila to straighten himself out.

Scarlett is on her tour bus talking to Avery on the phone, and Gunnar walks in. They are going on tour together (awkward).