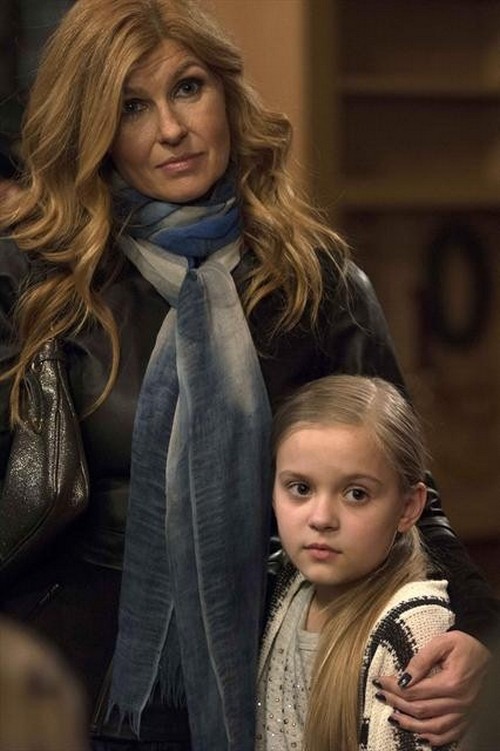 NASHVILLE returns to ABC tonight with a new episode called, “I Saw the Light.” On tonight’s show Rayna and Julieete take their concert tour to NYC, and Rayna doesn’t like the influence Juliette is having on her daughters.  Did you watch last week’s episode? We did and we recapped it here for you!

On last week’s show Katie Couric guest starred as herself when Rayna appeared on the “Katie” show, trying to set the record straight about her marriage and discussed balancing her career with motherhood. Juliette took Dante’s advice about controlling her destiny, but her attempt to take her album launch into her own hands backfired when she tweeted out a surprise concert location. Meanwhile, with Rayna was out of town, Maddie lied to Teddy about her whereabouts — with dangerous consequences; Deacon was drawn to his dog’s pretty new veterinarian, Stacey; Avery tried to control his musical destiny by flouting Dominic and Marilyn; and things were awkward between Scarlett and Gunnar, as he continued to process his brother’s death

On tonight’s show Rayna takes her children and sister with her on tour in NYC, but Rayna doesn’t like the influence Juliette is having on her daughters. Meanwhile Dante gives Juliette some career guidance that helps her see him in a whole new way; Deacon’s feelings for Stacey force him to reconsider his life on the road; a hunky new neighbor, Will (Chris Carmack), befriends Gunnar and Scarlett; Gunnar is thrown by Scarlett’s hiding information from him; Lamar threatens Peggy; and Avery jeopardizes his own future.

Tonight’s episode begins with Juliette flipping out because Rayna is headlining the tour and her face is plastered all over billboards instead of Juliette’s in NYC. Rayna brings her girls along with her to the big city and they decide pretty quickly that they’d like to be famous like mom. Maddie wants to pursue music seriously but Rayna wants her to just be a kid. Deacon is rethinkng his life on the road now that he has Stacey to occupy his time at home so he decides to bring her along to NYC.

Teddy using his time alone in the house wisely, he has invited Peggy over and it takes her under two minutes to drop her trench coat and find a bedroom.

Will has moved in below Scarlett and Gunnar and so he decides to introduce himself and make himself at home in their apartment. He is a distraction from their heavy issues at least for awhile.

Juliette is trying really hard to revamp her image with Dante’s help. She thinks that it’s time she calm herself down and learn how to pitch herself as a good spokeswoman for twenty something women.  While in NYC Rayna’s girls want to hang out with Juliette after the show but she nixes that idea. She thinks Juliette isn’t the best influence, especially for Maddie. Rayna admits that she just doesn’t want her kids messed up by the business.

Stacey sits down and tells Deacon that she’s surprised he invited her on the road especially considering his history with Rayna- that she found out about from a stranger. He admits that there is history, but tries to assure her that it’s in the past.

Juliette is going over every inch of how to carry herself at a corporate meeting with Dante. She seems to have some type of ulterior motive in her interactions with him.

Scarlett cooks dinner for Gunnar and Will but cuts out on the conversation early because she feels completely out of place. The guys are singing together and bonding, leaving her feeling completely out of the loop.

The biggest meltdown of the night comes between Juliette and her mother. Juliette apologizes for stealing Dante, who is also her moms sponsor, away from her. She tells her that she needed him to help her nail a big endorsement deal but mom could care less. She just wants quality time with Juliette, not her money.

Scarlett wakes Gunnar up before she leaves for work and hands him the contract that Rayna offered her. She still hasn’t signed and says that she’s not going to do it. She says she was just singing before she met him but with him it turns into making music.

Despite their implosion, Juliette dedicates her latest single to her mom. Gunnar insists that Scarlett sign the contract. He tells her that he wasn’t jealous of it but was angry that she wasn’t honest about it in the first place. Rayna grabs Deacon at an after party and tells him that she thinks that Stacey is good for him, giving him a clear sign that its over between them. He goes back to his hotel room and tells Stacey that he thinks maybe it’s time he come in off the road once and for all.

Tune in next week for more Nashville!