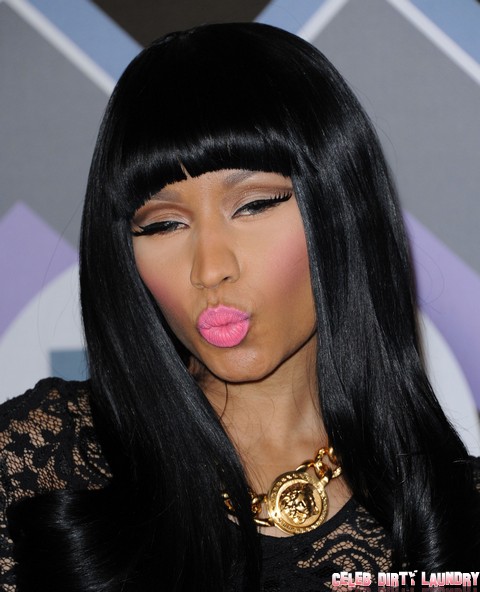 Usually when you sign on to do a show like American Idol, you’d carefully read through the contract so you are aware what is expected of you, but it looks like a certain someone didn’t do so. Nicki Minaj has told Ellen Degeneres she hates the working hours on the talent show because she’s not used to “staying in one place for a long time”. Um, so what does she expect us regular people to do?

The rapper, who went for a more classy look as she promoted the 12th series of the program in a red dress and a gold-chained necklace, expressed how it can all get a little too much at times when she sits in the chair and watches people audition in hopes to become the nation’s idol. “I should have bought like a sleeping bag, some pillows and stuff… I was just like ‘Ahh, what did I sign up for?,’ Nicki told the talk-show host as the audience laughed.

The average person in America happens to work 8 hours a day while actually doing something, whereas this Barbie doll freak has the nerve to complain about having to sit in a chair for several hours (which includes numerous breaks) and being fully aware that she wouldn’t be making no ordinary salary. According to sources, Minaj agreed to become a judge on American Idol as long as they were willing to cough up $12 million, making her one of the highest-paid singers to judge a talent show.

Ellen wasn’t going to miss out on an opportunity to talk to the 30-year old on having a frosty relationship with Mariah Carey after their heated argument on the set of ‘Idol back in October. Barbara Walters has claimed the rapper threatened to shoot Carey during their spat that ended up leaking  on the internet, while others say Minaj wasn’t going to return to the panel because she felt humiliated by someone having filmed her during her psychotic outburst.

Sadly, she did end up staying on the show and has now said that her beef with Mariah isn’t over just yet, explaining that if “shade” is thrown her way, she will not be the one sitting back and letting it slide: “You know what, I’m not looking forward to live shows. I can not trust myself – just like if there’s a comment being made.. I don’t want to look like a crazy psycho again.”

So, two things we learned from Nicki in her recent interview with Ellen; that she works 8 hours a day which must be so extremely exhausting and that her on-going feud with Mariah isn’t over just yet! Someone needs to give this girl a break, she works 8 HOURS  a day! How does she cope?

Check out the video below and let us know what you make of Nicki’s comments.