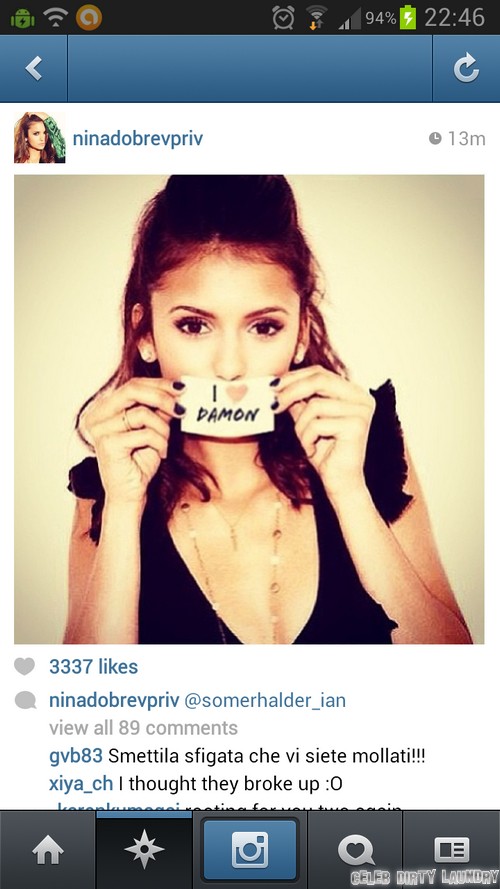 Fans of Ian Somerhalder and Nina Dobrev got the sad news today that their favorite couple are no longer together. We here at CDL have been telling you since right after Oscar night that these two seemed to be at the very least going through a rough patch, if not a clean break. If you’re publicly attached at the hip for well over a year and then all of a sudden your paths don’t ever seem to intersect, even at work, well it’s obvious that something is brewing. Now that the cat is out of the bag I think everyone was waiting for either Nina or Ian to comment and finally Nina posted a photo of herself holding a heart that is loyal, to Ian’s  Vampire Diaries character.

The photo shows Nina holding up a little piece of paper to her mouth and on it is written “I Love Damon”. What a double edged comment from TVD’s hottie! By proclaiming her love for Damon she ensures that her strong fan base will continue watching the show in spite of the drama behind the scenes. She is also separating Damon from the man who plays him. My guess is that Damon possesses a quality or two that Ian was lacking and this is Nina’s way to send a private yet precise jab at the actor.

If you had watched the actress’s Twitter account like we have then this split isn’t too shocking because she has spent two months dropping clues about the relationship trouble. Taking a few girl’s trips with Julianne Hough also spoke volumes, especially since both ladies are in the same blue single boat. Both invested in a relationship that was ultimately not going anywhere and they both have likely bonded over a multitude of feelings. It sucks to realize that you’ve wasted precious time on someone that was never going to give you what you ultimately wanted. Ian was that guy that wasn’t ready to make it real, despite what other media outlets may say. He simply kept things quiet while Nina came to terms with the fact that it was over.

At least now she can find her way through her anger and upset enough to love Ian’s character! Were you shocked by the confirmation that Ian and Nina split? Tell us your thoughts in the comments below!