BY Annemarie LeBlanc on March 24, 2013 | Comments: Leave Comments
Related : Once Upon A Time, Recap, Television 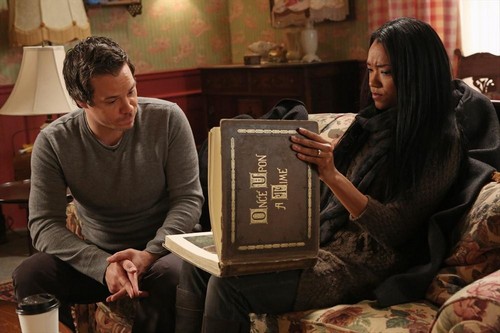 ABC’s hit fantasy drama ONCE UPON A TIME returns tonight with a brand new episode called, “Selfless, Brave and True.” On tonight’s show Mary Margaret discovers that August has been hiding away from the others and is completely made out of wood, and Emma is shocked when Neal invites his fiancee, Tamara, to come to Storybrooke.  Did you watch the last episode? We did and we recapped it here for you!

On last week’s episode Emma, David and Mr. Gold had to protect Mary Margaret against Regina, who was out for revenge and made it her mission to kill Mary; and Henry, fed up with all of the feuding, devised a plan to put an end to magic. Meanwhile, Regina discovered that a father and son had somehow found their way into her allegedly undetectable town as she and the fairytale characters dealt with the effects of the newly cast curse 28 years prior.

On tonight’s show while Mary Margaret goes off on her own in an attempt to come to grips with what she did to Cora and how her deed has affected her, she stumbles upon August, who has hidden himself away from the others and is completely made of wood — ashamed at the actions he has taken in life; and Emma is shocked when Neal invites his fiancée, Tamara, to come to Storybrooke. Meanwhile, before the curse was cast, August is introduced to a man of magic who may be able to prevent him from turning back into wood — but at a steep price. 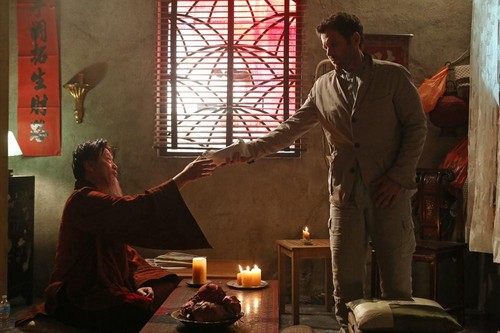 Mary Margaret gets up and she tells David she has to go to the woods, she has a few things to think about.  Mary Margaret tells David to go look at the bean crop.  David is excited about it because one they harvest they can go home.

Emma and Henry come to see Neal, Henry has brought his Fairy Tale book so Neal can tell him things about it.  Neal tells Emma that Hook is still out there.  Neal also tells Emma that his fiance is on her way her.  Emma is not pleased because many strange things are happening in Storybrooke.  Neal tells Emma he needs her.  Emma warns Neal he better tell his fiance Tamara the truth.  It won’t be a good idea if she finds out about him on her own.

Mary Margaret is in the woods shooting arrows and she hears a noise.  She finds a broken arrow and then she sees a trailer.  She heads into the trailer and finds August who is almost totally wood.  She is shocked.

Flashback Hong Kong- August is at the hospital and the doctor tells him he does not see anything.  He asks August to leave.  August takes a knife and sticks it in his wooden leg but the doctor does not see his leg wood.  The doctor calls security and August runs.  He bumps into a man as he runs and tells him he knows someone who can help, a man named the Dragon.

Mary Margaret meets August in the trailer and she tells him he does not have to hide.  She tells August that he can come back to Storybrooke people will accept him.  August was hoping people would forgive him but he is not sure.  Mary Margaret tells him he has to stop feeling sorry for himself, everyone deserves a second chance.  August asks her to leave and not tell anyone she found him.

Tamara, Neil, Emma and Henry are having bagels and Henry asks Tamara how she met Neil, Tamara tells him how they met.  Henry has to go to school and he tells Neil to hang on to his Fairy Tale book.  Tamara thinks Henry is a nice kid.

Neal tells Tamara that there is something he has to tell her, he is from the Enchanted Forest and not here.  He gives her the Fairy Tale book so she can see.  Tamara tells him they are Fairy Tales and Neil tells her they are his history.

Tamara does not believe it – she thinks Neal is playing her for a fool.  Tamara thinks that Neal has a thing for Emma.  She tells Neal when he is ready to be honest to come and find her.

Flashback Hong Kong- the man August met in the elevator is taking August to the Dragon.  Meanwhile we see Tamara leaving the Dragon.

Regina meets Owen at Grannys.  Regina tells Owen that she is Henry’s Mom and wanted to thank him for calling about seeing Henry in the woods.  Regina thinks the man look familiar.  Regina tells him if there is anything he needs to not hesitate to call her.

Mary Margaret comes in and Regina makes a snarky remark to her.  Mary Margaret runs over to Emma and Gypetto and tells them she found August.  They are going to see Mother Superior (the Blue Fairy) to see if she can help.  Tamara overhears what they are saying.

Flashback Hong Kong – August goes to see the Dragon and the Dragon asks why he came.  August shows him his wooden leg and the Dragon recognizes him as Pinocchio.  The Dragon tells him he can help him but there are conditions.  He needs something close to his heart and something that cannot be replaced.  He wants August’s necklace.  August tells him it is worthless but Dragon wants it because the string is from the original cord that Gypetto made him from.  He tells the Dragon he also needs $10,000.  If August brings it that evening he will never turn to wood again.

Mary Margaret and Gypetto go to Mother Superior.  She tells them August is just changing back to what he is.  She told him as long as he remained honest and a good buy he would not turn back, but he did not.  Mary Margaret wants to know if there is a second chance for him.  She tells Gypetto not to despair.

Flashback Hong Kong- August is in a bar and Tamara asks him to sit down and have a drink with her.  Tamara flashes a lot of money – he asks Tamara what she came her for and she tells him cancer, she is trying to find a cure or someone who can promise a miracle.  She heard about the Dragon and she can help her.  August tells Tamara he has a skin condition.  Tamara gets a phone call and she asks August to watch her purse.  He removes the money from her purse and leaves.

Back in the trailer August hears a knock at the door and it is Tamara.  She says, “long time.”

Flashback Hong Kong- August goes to the Dragon and he gives him the $10,000.  The Dragon tells him what is in the bottle can stop him from turning to wood but that is only a symptom.  He tells August only he can cure himself.  He runs down the stairs and Tamara is there.  She tells him what he has is hers.  August apologizes and runs and drops the bottle.  Tamara picks it up and leaves.  She tells August who has fallen on the ground as she walks away he deserves his fate.

August tells Tamara he cannot leave he needs to know why she is here.

Gypetto is blaming himself for August’s problems.  Gypetto tells Mary Margaret it is his fault because he lied to because the wardrobe he made for Emma had a place for 2 people.  He put Emma and his son, instead of Mary Margaret.

Gypetto goes into the trailer where August was and he is gone.

Flashback – Hong Kong Tamara comes to see the Dragon and he tells her to take her photograph.  The Dragon is mad because he realizes she is not sick.  She tells him she has been searching for him for years.  He realizes she has been searching for magic and it has not been easy to find.  She tells the Dragon she analyzed the liquid in the bottle and found the ingredients in the bottle are not from this world.   She tells him now that she found him, she cannot risk anyone else finding him.  She is going to hill him, she takes out a taser.  He tells her she has not met the real him and starts to levitate.  She takes the taser and tases him and he falls to the ground.

August is in the car and leaving Storybrooke  but he calls Emma and tells  her he has to warn her.  Tamara walks in and she tells August not to disappoint her.  August tells Tamara that when riding his car he saw the picture of Tamara and her grandmother and he realized Tamara killed the Dragon.  August tells Tamara that he has decided to live a selfless life and he cares about the people of Storybrooke.  He is going to warn them.  Tamara tells him now he is not, she tasers him.

August stumbles out on the street as Emma, Gypetto, David, Mary Margaret and Henry run up to him.  He apologizes to Emma and says, “shes” and then he turns totally to wood.  He tried to use him last dying breath to warn them.  Henry says he was brave and truthful – Henry tells them they need the Blue Fairy.  The Blue Fairy runs over and says if August’s actions were indeed brave and truthful maybe she can save him.  She waves her wand and Pinocchio appears and she is a boy – he hugs Gypetto.

Neil is there and Tamara comes over and says, “It is true!”

Emma asks Pinocchio if he remembers what he was trying to tell them before he turned to wood.  But Pinocchio tells her he does not remember, if he did he would.

Neal tells Tamara if she wants to go back to NYC she can.  Tamara tells Neal she loves him.

Current time – Emma tells Henry she is sorry she lied about his Dad, she promises to never lie again.  She asks Henry to never push her away again and he agrees.

David asks Mary Margaret if she is ready to tell him what is going on.  Mary Margaret tells David that last week she went to Regina’s house and confronted her.  She hoped Regina would kill her, because she could not handle what she did to Cora.  She tells David that Regina took her heart out and it had started to blacken.  David tells her redemption is possible.   But Mary Margaret believes it is but she could lose everything.  David tells her he knows her better than anyone and there are other options.

Owen is in his hotel room and Tamara comes to visit him. She tells him she does not have much time Neal is in the shower and they start to kiss.