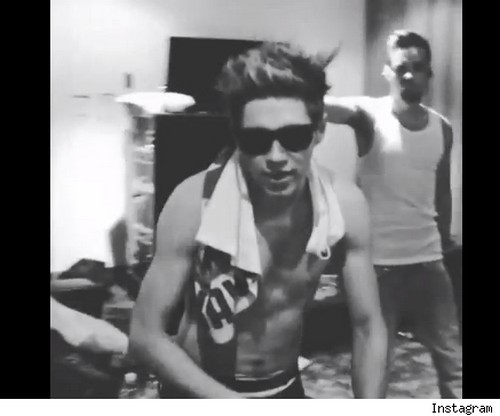 One Direction touched down in Australia for a series of concerts in their Take Me Home world tour. It’s their first time in that country and already, one of the boys showed there’s much more to him than just crooning pop songs that teenagers swoon over.

Among the five, Harry Styles, Niall Horan, Liam Payne, Zayn Malik, and Louis Tomlinson, Irishman Niall could show his bandmates a thing or two at killing it rapper-style!

It was in a concert in the land Down Under where Niall got all gangsta with his own version of Coolio’s “Gangsta’s Paradise,” a song that scored Coolio a Grammy back in 1996. Liam got into the action by acting as Niall’s back-up homie.

This is definitely one side of Niall that he should explore when One Direction eventually disbands. Okay One Direction fans, don’t get out that box of tissue and cry your eyes out just yet. This won’t happen for a while. The boys are riding high with hit albums, a hit movie, and concerts around the globe. Just sayin’ that if and when that day comes, and all boy bands go and do their own thing eventually, Niall has found his plan B and who knows if going into rap music would prove to be more artistically and commercially rewarding for him in the future, right?

Meantime, go and show some love for the hottest boy band in the world. They certainly deserve it. They’re all talented, gorgeous, and very appreciative of their fans, as we’ve heard.

P.S. While we’re at it our condolences to Liam Payne whose Grandfather passed away while he was in Australia. Liam, who tweeted about his Grandfather’s demise stating it was a tough time to go through, thanked his fans for their love and support.