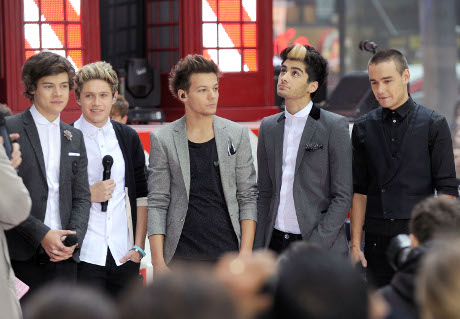 All you people just can’t seem to get enough news about One Direction, one of Britain’s powerhouse bands that’s working to charm the world with their accents, whiny songs, and teen attitude. They recently signed another contract that will keep them in a binding relationship for the next couple of years, so they won’t be fading out of the spotlight anytime soon. Get ready, folks. Harry Styles, Zayn Malik, Niall Horan, Liam Payne, and Louis Tomlinson are here to stay.

Yesterday we looked to see which bandmate has the highest celebrity IQ, which, as you know, takes into account their actions in the Celeb World over the past few months. The higher amount of scandalosity, the higher the IQ. I think we all decided that Harry Styles, who recently underwent a lot of media coverage for his somewhat brief hookup — and inevitable break up — with Taylor Swift was the winner of that round

Continuing with our theme of “Who in the band has/is/was,” we are going to look at the one question that always seems to pop up in the rumor circles . . . who is still a virgin? Well, being that they are the most famous boy band at the moment, and being that they are all the talk of the town and could get with anyone they’d like to get with, I’d say that none of the One Direction blokes are virgins. But then again who knows? All we can say is this: They aren’t the purity ring wearing Jonas Bros. That’s for sure. One thing that’s probably not real life: One Direction virgins.

Harry Styles was obviously seen with Taylor Swift. He was caught sneaking (or not so sneakily) into her hotel room — and photographed leaving the following morning. Bet it was a cold night for those photographers. Could you imagine camping outside in the cold, waiting and waiting and waiting, to get a snapshot of a celeb. To catch them in the act!

As for the others, it’s not as if they’re at all coy about their sexual and personal lives. Niall Horan’s dad — um, yep, awkward — chats openly about his son’s sex life as reported by the Mirror UK and Zayn, like Harry, has bee photographed leaving girls’ apartments before. Who knows about the other two — poor things, they seems to just fall through the cracks, don’t they?

Wow, that article was weird to write. Ur welcome though.